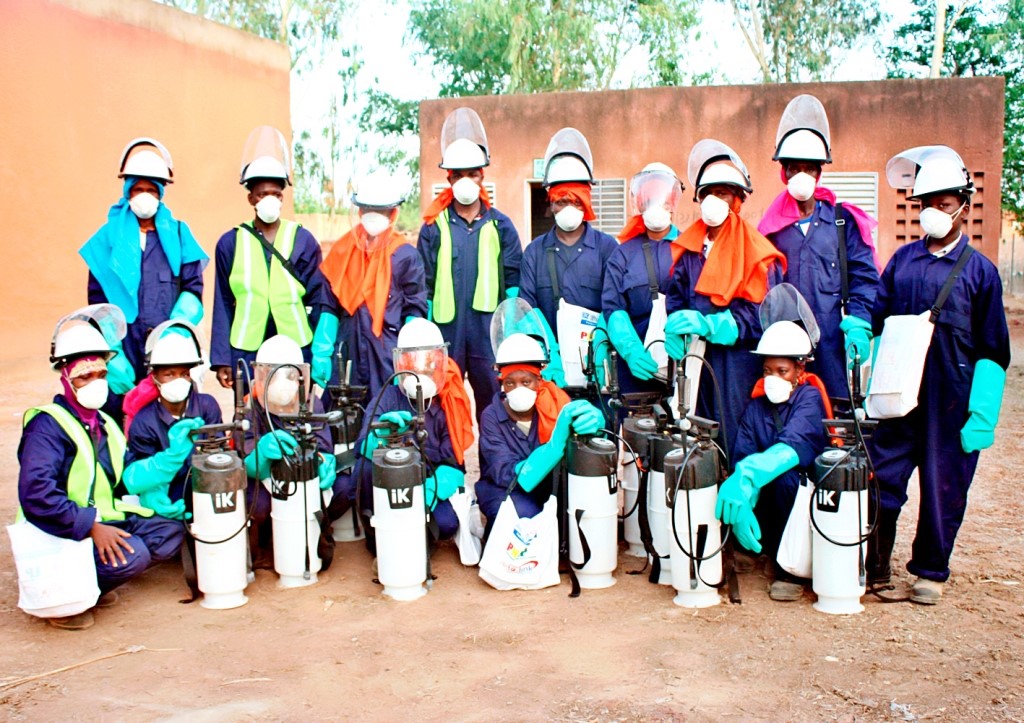 Malaria remains a major public health issue in Burkina Faso as it is endemic throughout the country. Eighty percent of the estimated 19 million residents of Burkina Faso live in rural areas, where they are at greater risk of poor health compared to urban communities. To reduce the burden of malaria in the country and enhance vector control, the U.S. President’s Malaria Initiative (PMI) VectorLink Project implements indoor residual spraying (IRS), which kills mosquitoes that transmit malaria by spraying insecticide on the walls and ceilings where mosquitoes prefer to rest. PMI VectorLink serves three major health districts in Burkina Faso, including Kongoussi – the country’s largest district.

Kongoussi is surrounded by swamps and lakes that provide optimal larval breeding sites for malaria carrying mosquitoes. Residents have long-suffered from mosquitoes’ nighttime feeding patterns so much so that they have named the district Kongoussi, which translates to “village that cannot sleep” from its original name, Bito. Mosquitoes enter homes late at night to feed on human hosts; their uncomfortable bites and the noise of their buzzing often wake residents and prevent them from getting a good night’s rest.

Malaria prevention and control activities are guided by a National Malaria Control Strategy, which supports the long-term vision of eliminating malaria in Burkina Faso by 2030. The PMI VectorLink Project in Burkina Faso is working with the Ministry of Health (MOH), the National Malaria Control Program (NMCP), and other stakeholders to achieve at least 85% spray coverage in the IRS targeted districts.  When it was announced that PMI VectorLink would conduct IRS in Kongoussi, local authorities were enthusiastic and hopeful for Kongoussi’s sleepless population.

When spray operators arrived in the village at the start of the 30-day spray campaign, they were eagerly welcomed by residents of the community. After having their houses treated, beneficiaries proclaimed their first peaceful night’s sleep, free from the discomfort and nuisance of mosquitoes. Some people who had previously refused IRS treatment reportedly came running after spray operators asking them to please go back and treat their homes after hearing of success from their neighbors.

In Kongoussi, overall mortality of malaria-carrying mosquitoes 24 hours after spraying in houses treated was 100%, indicating that the insecticide used (Actellic 300 CS) was highly effective and spray quality was good. PMI VectorLink sprayed 126,961 homes in Kongoussi, covering 90% of the district, exceeding the MOH and NMCP goal. The IRS campaign protected 365,430 people, including 61,180 children under the age of five and 6,664 pregnant women in the once weary district.

PMI VectorLink Burkina Faso’s Chief of Party Adama Kone jokingly said to district authorities, that hopefully they could change the village’s name from Kongoussi to Nangoussi, “the village that sleeps.”