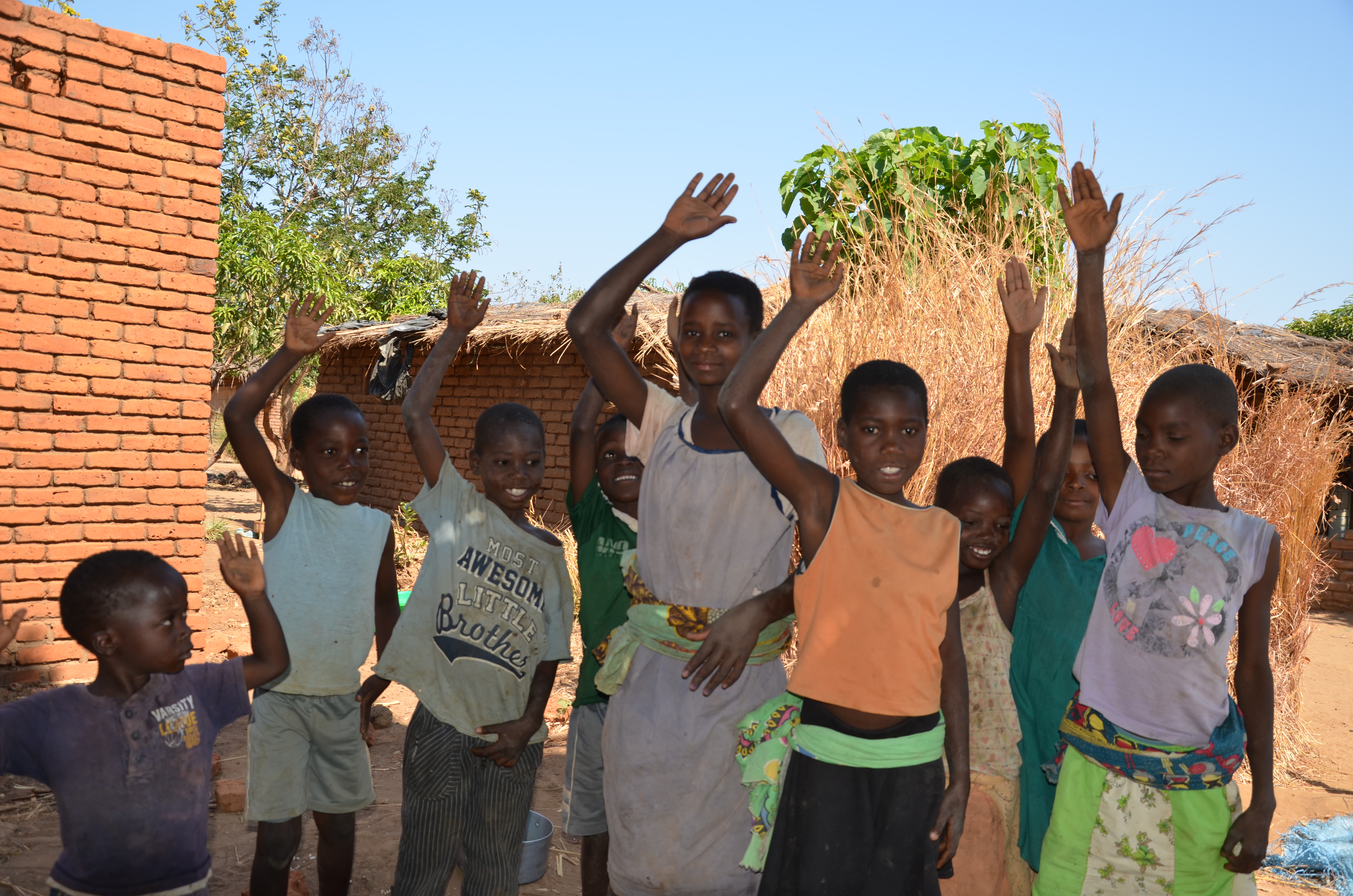 In the southeast African country of Malawi, malaria accounts for 40 percent of hospitalizations in children under five, 30 percent of all outpatient visits and is one of the major causes of morbidity and mortality across all age groups. Transmission is perennial in most areas and peaks during the rainy season from November to April. To help protect people from malaria during this year’s rainy season, the U.S. President’s Malaria Initiative (PMI) conducted an indoor residual spraying (IRS) campaign through the PMI VectorLink Project in October and early November 2018. IRS uses an insecticide that kills the mosquitoes that transmit the disease. PMI VectorLink successfully sprayed 112,264 structures during a 32-day campaign, protecting 501,324 people including 11,066 pregnant women and 90,953 children under five. Recently, we talked to some of the beneficiaries and seasonal workers for the project. Here is their story. Photos by Laura McCarty/Abt Associates 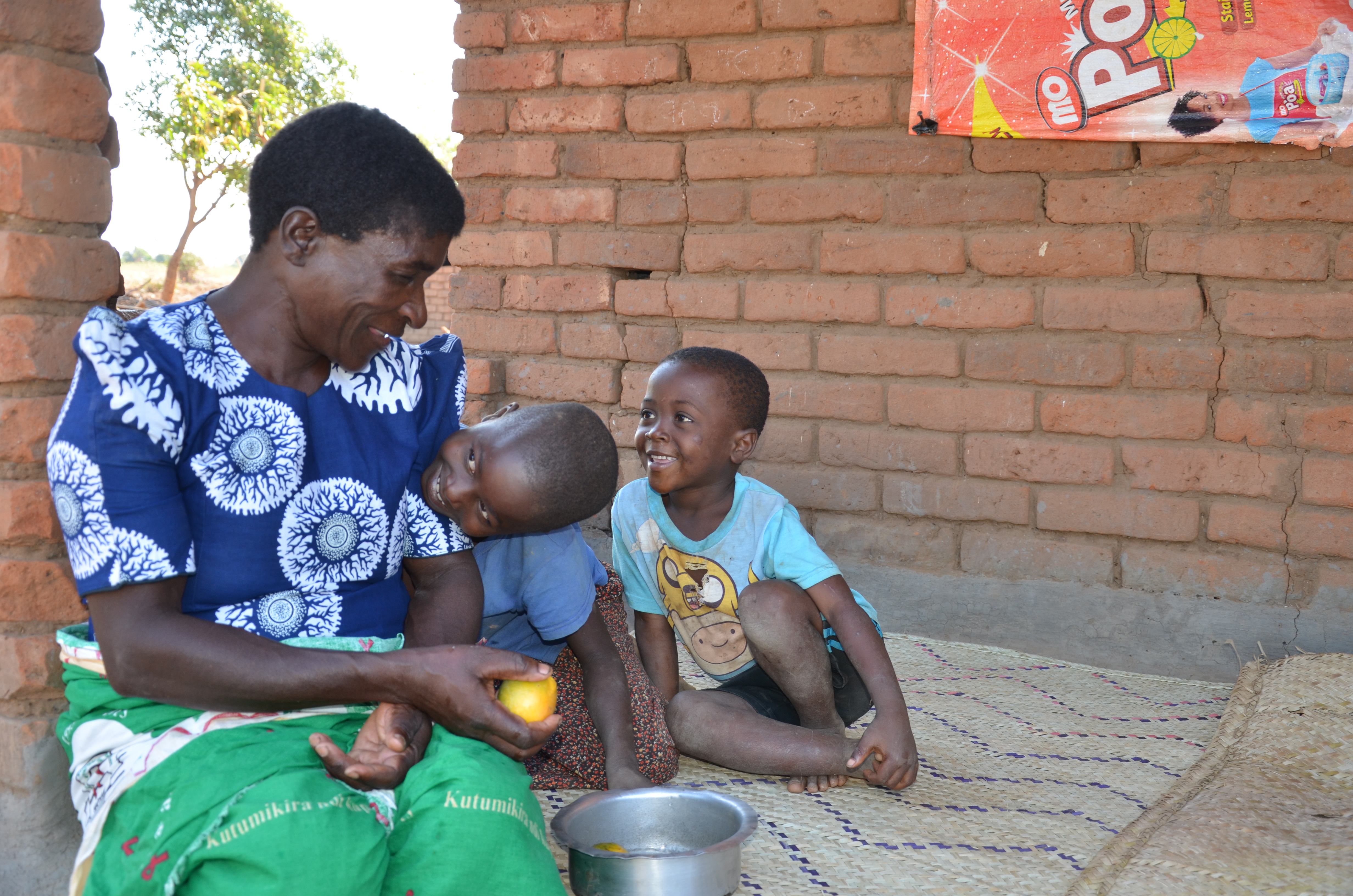 Jessica Katunda, a widow who is living with HIV, was recently protected from malaria through the PMI VectorLink Malawi’s indoor residual spraying campaign. “As a person living with HIV, we suffer a lot. Our immune system is compromised, making it difficult to fight disease. I am thankful for IRS.” 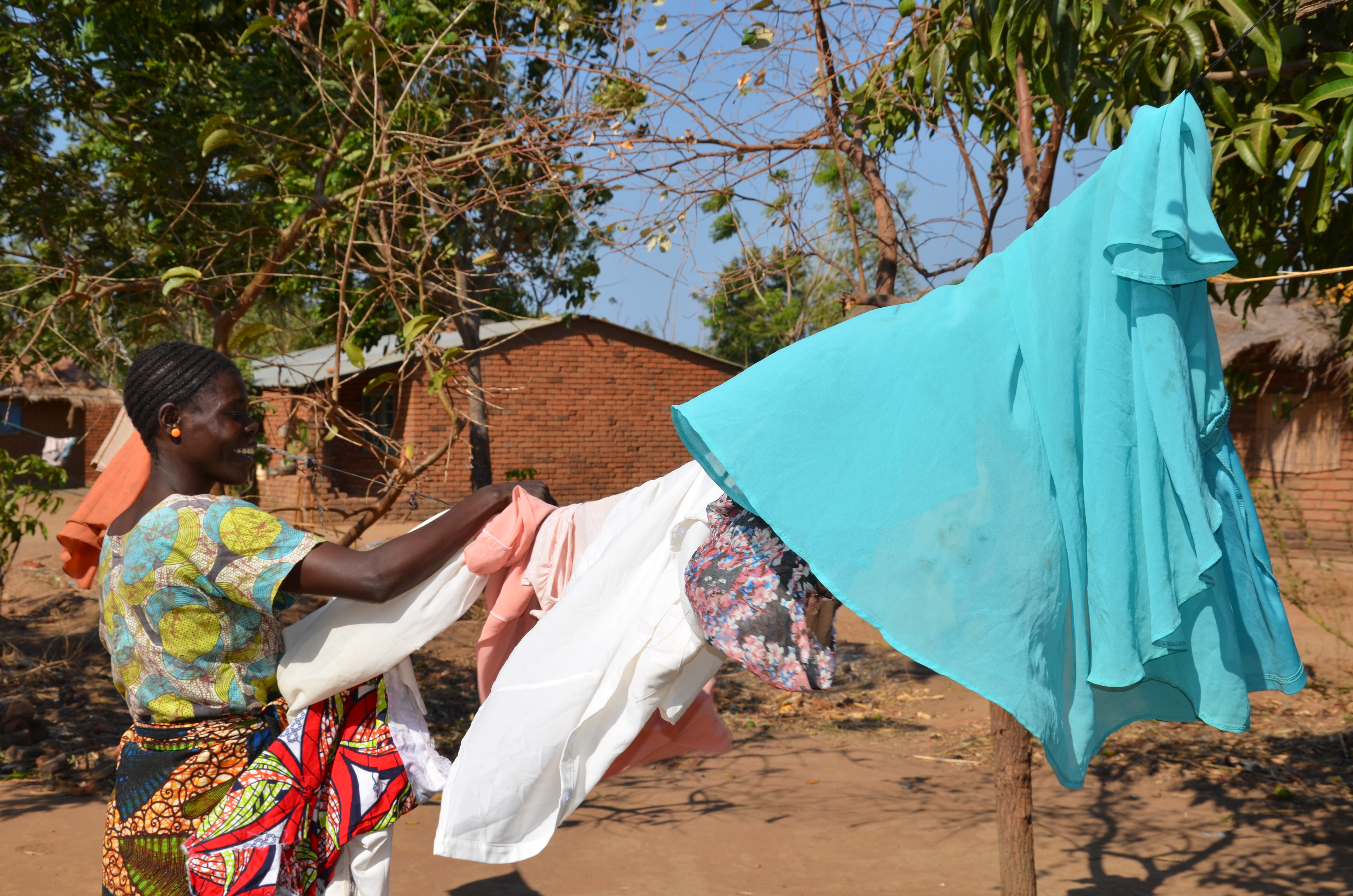 When family members, particularly children, are sick, women are most often the primary caregivers in Malawi. IRS helps protect people from malaria, enabling women like Elizabeth Kwanjiwao to work and earn money through activities such as washing clothes. 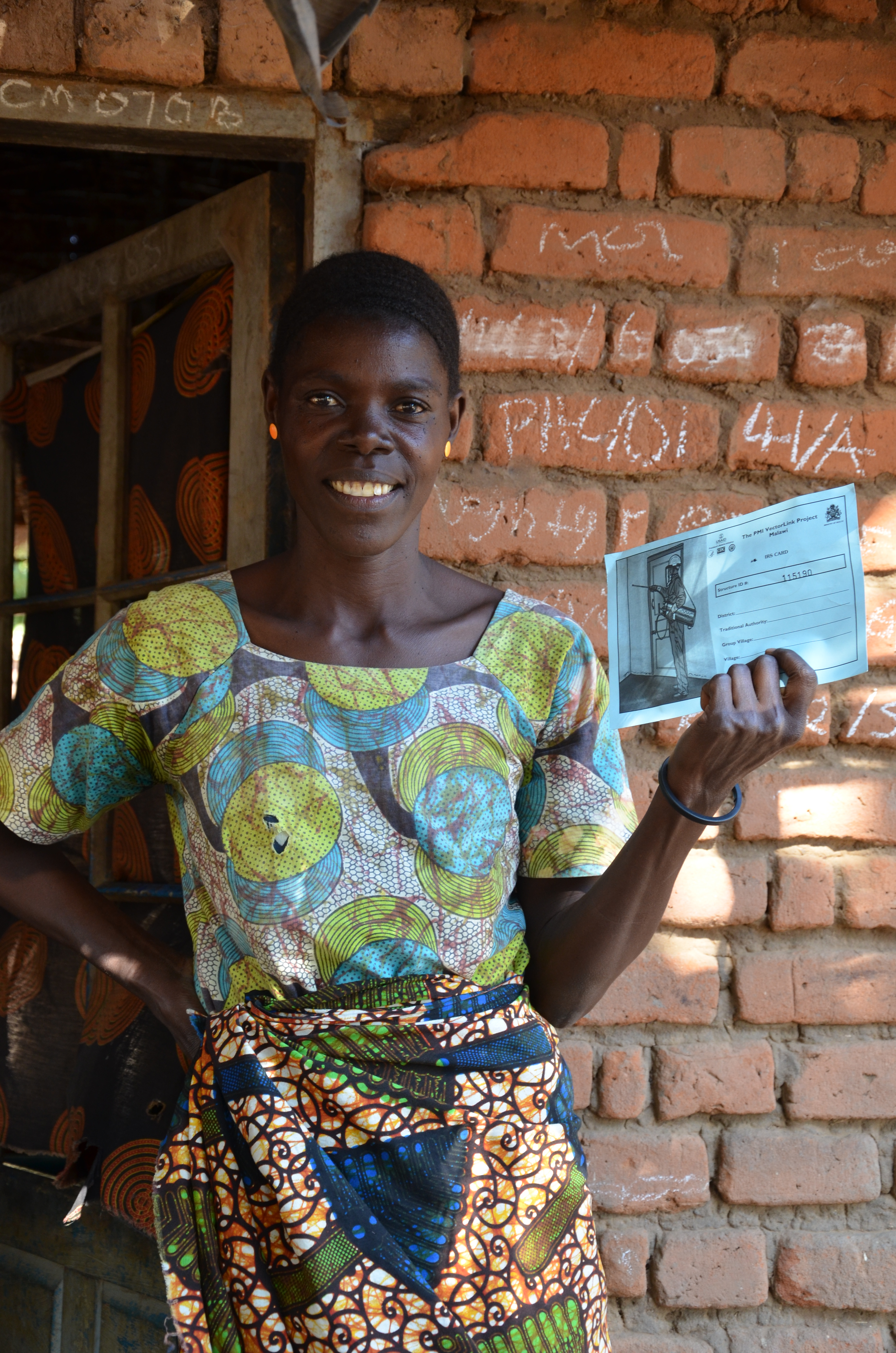 Elizabeth Kwanjiwao shows off her IRS card which helps keep track of when her house is sprayed. The card also provides information on how to prepare for spraying. A mother of five, her four-year-old daughter has suffered the most. “She had malaria three times in October. I was very afraid. IRS is a success. Now my children can go to school.” 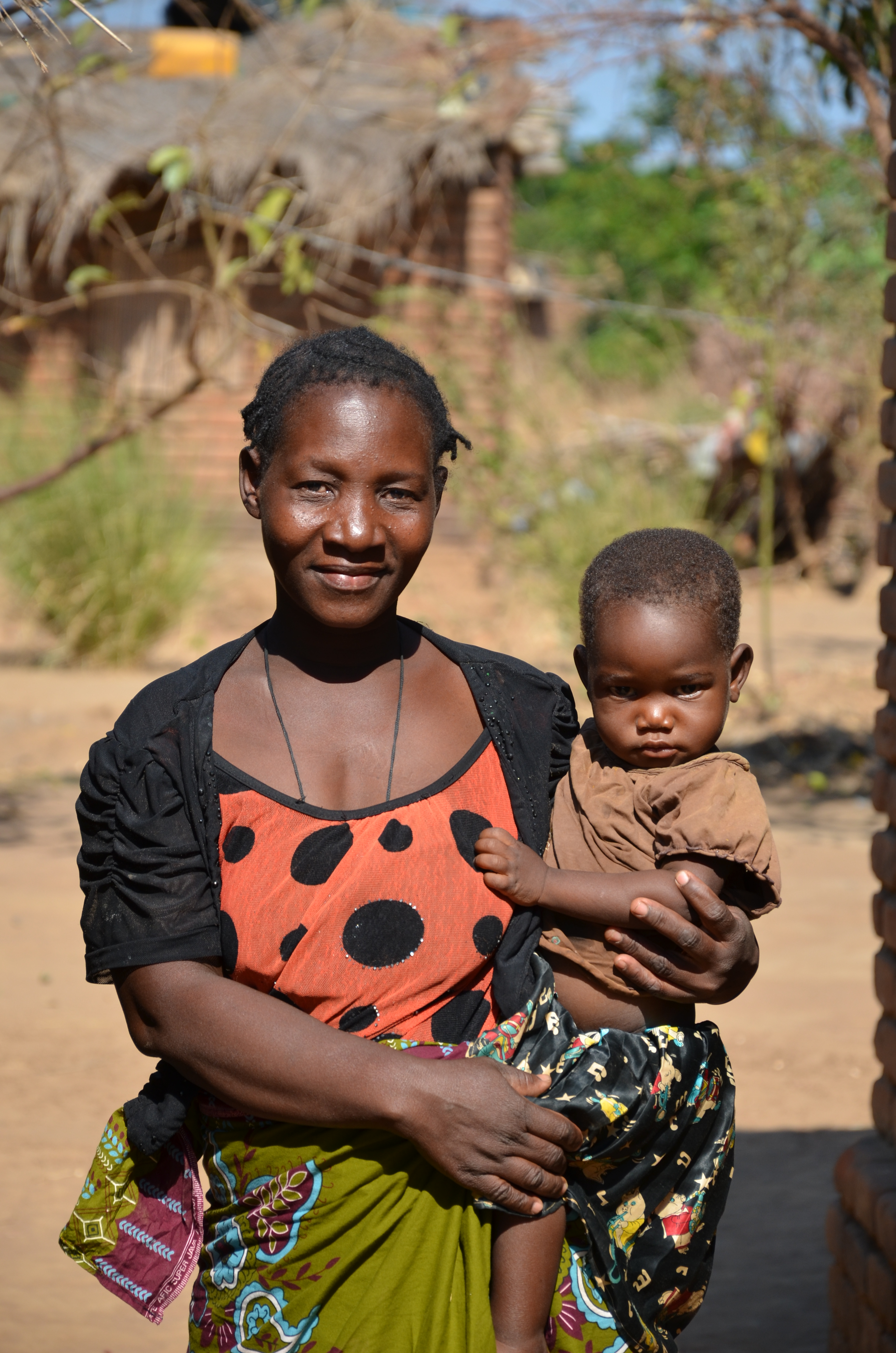 Ananne Nkhoma, a mother of 8 children, said, “Malaria just passes from one child to the next. When you have illnesses in the family, you don’t have time to do much else but take care of those who are sick. It really affects the family. I can’t earn money. Ever since my house was sprayed, no one in my family has had it. Once the mosquitoes come in the house, they die. I really appreciate the IRS. As we approach the rainy season, I feel ready and secure.”

These kids may be smiling, but they are raising their hands because they’ve all had malaria…this year…multiple times. Six million Malawians – one-third of the country’s population – suffer from malaria every year. The PMI VectorLink Project recently conducted an indoor residual spraying campaign to kill the mosquitoes that carry malaria. These kids are smiling because they said that they know that the people who come into their village “looking like soldiers” to spray their houses are saving their lives. Heroes come in many forms. 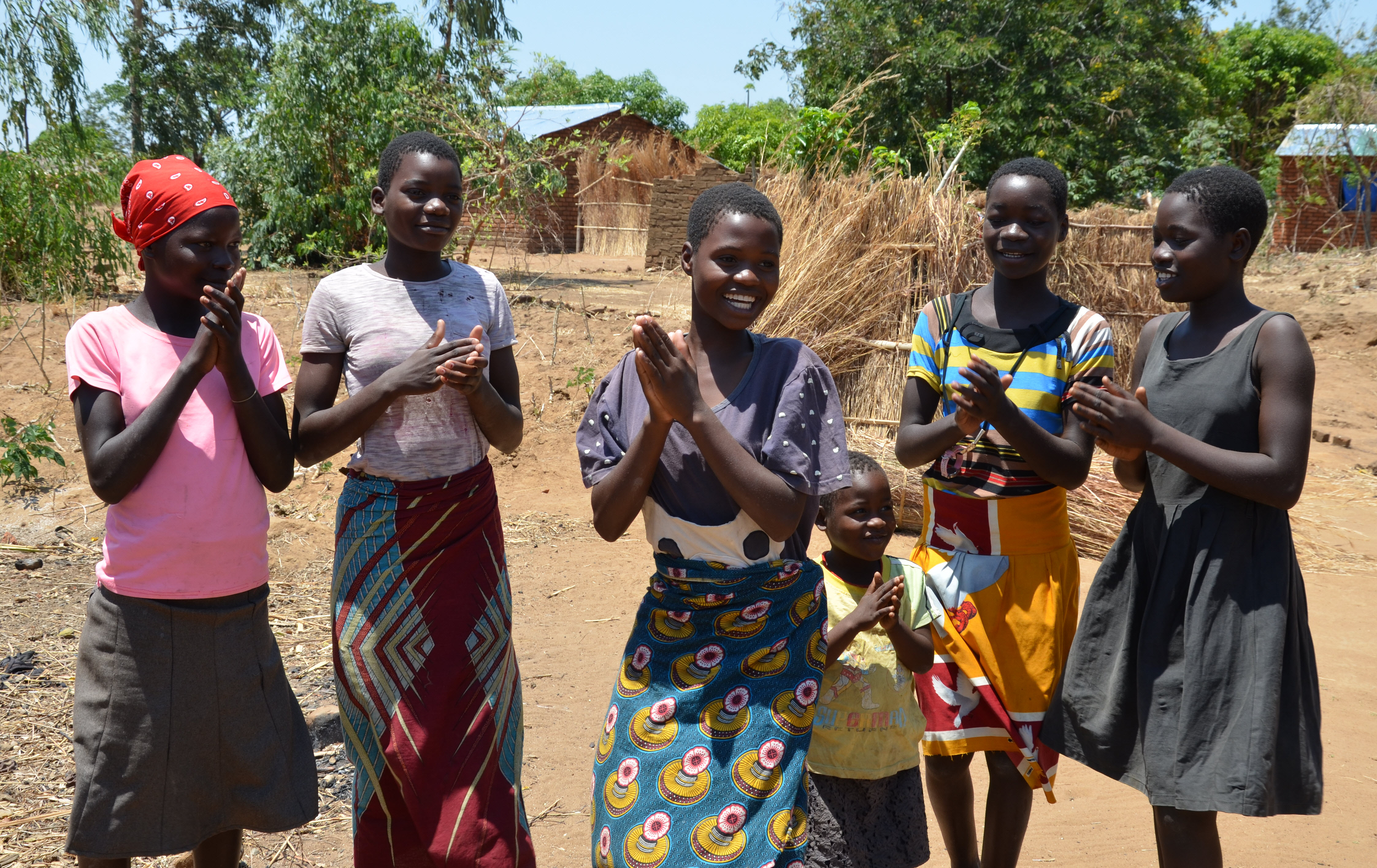 These teen girls are out of school because they couldn’t afford school uniforms, which cost approximately US$2. Their parents said that the children are often ill from malaria and would miss school frequently so it was hard to justify spending the family’s minimal earnings on uniforms if they couldn’t go to school. With their homes sprayed these girls are looking forward to going back to school. 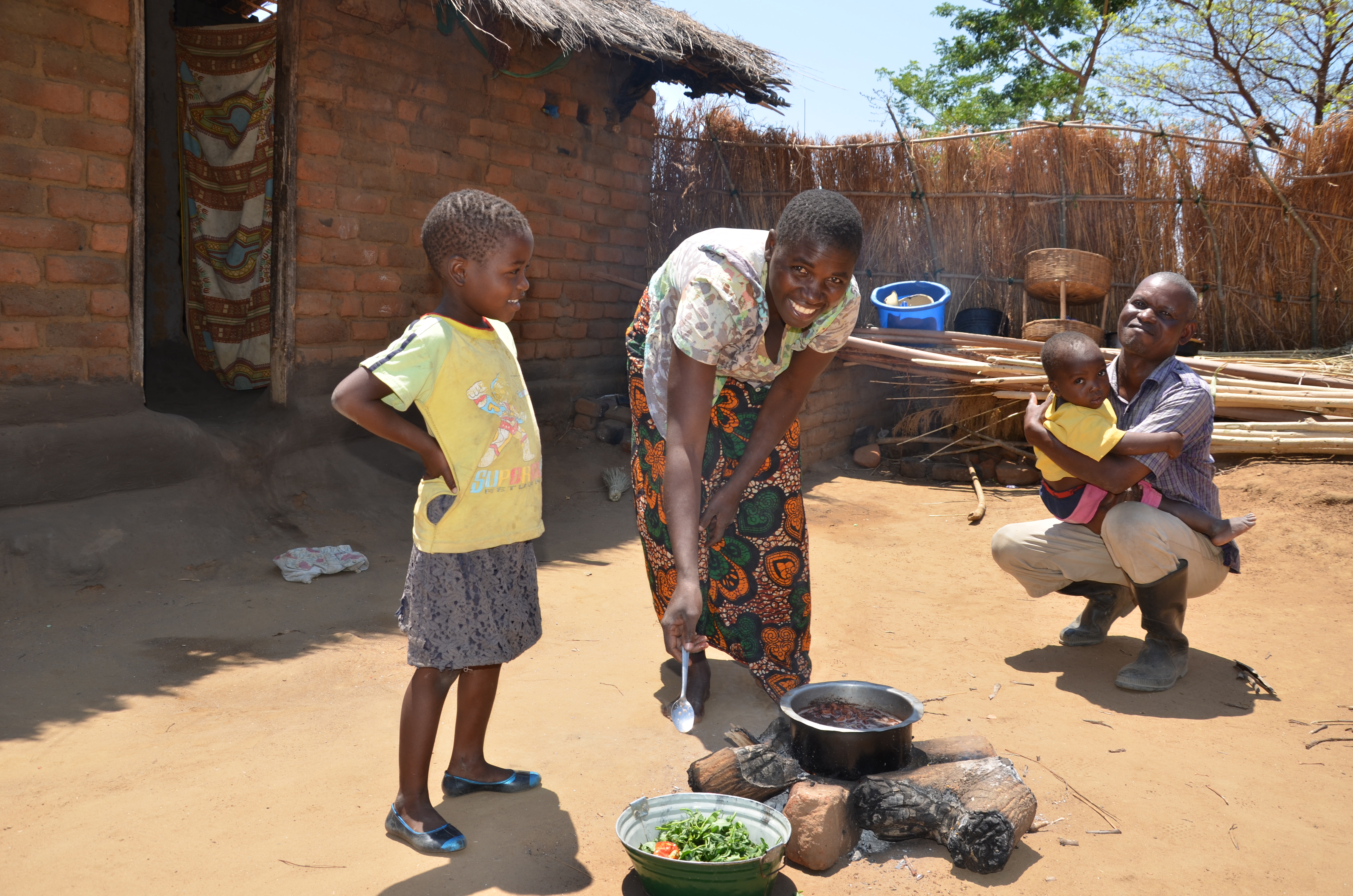 Zione Mangani shown here with her husband Matthews Jaya and two of their eight children, said, “Malaria is a big issue here. My six month old had malaria the last week of October. In September my two-year-old had it. When the community health workers came to tell us about IRS, I was very excited. I remember when we last had our homes sprayed six years ago and how it killed the mosquitoes. Without IRS, we’ve really suffered from malaria. Every person in my family has fallen ill because of malaria this year. That’s 10 times of going to the hospital. My brother-in-law and my sister-in-law both died from malaria last year. My mother and my niece died from the disease as well. We are very grateful for IRS.” 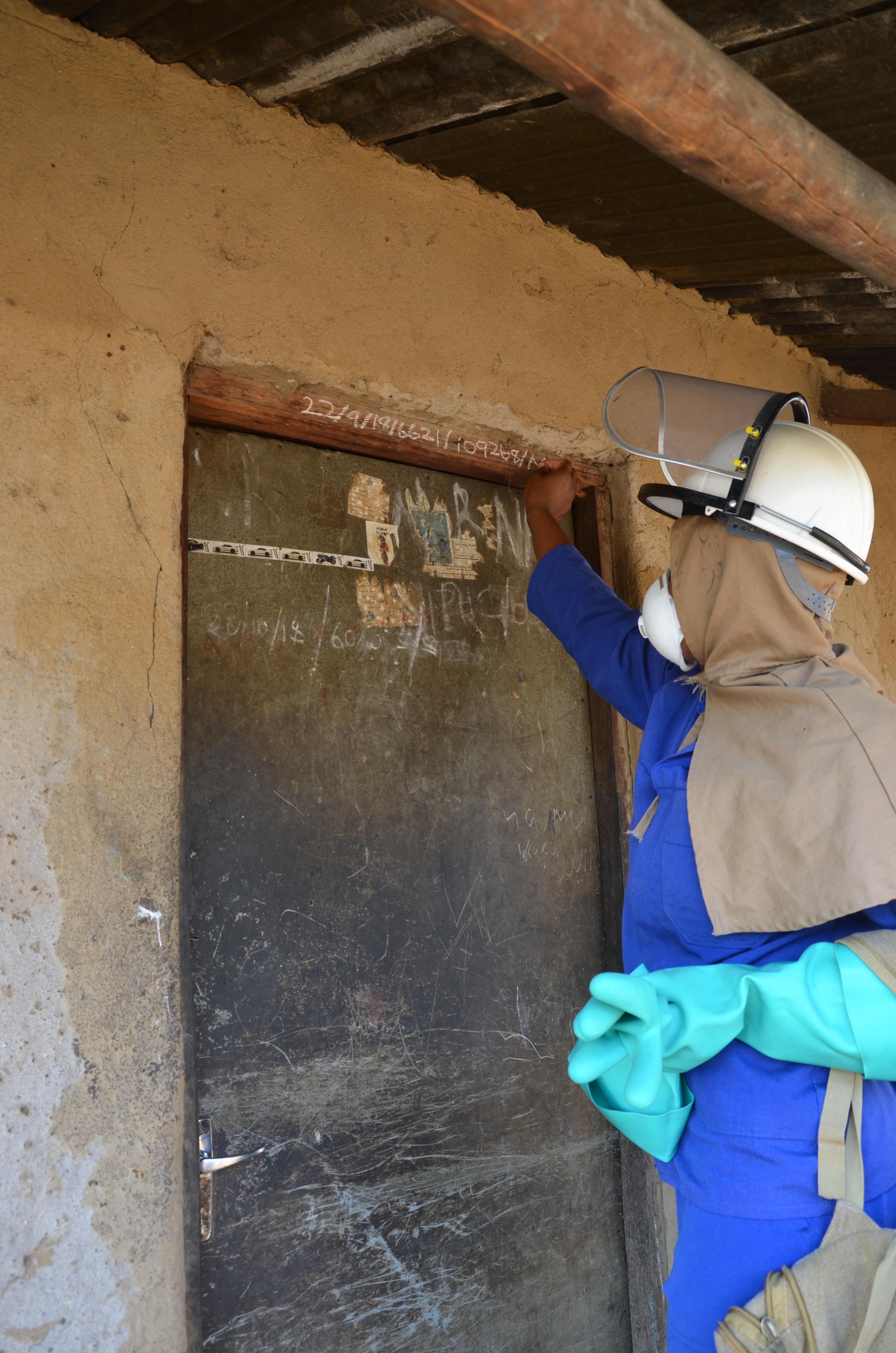 The PMI VectorLink Project marks the houses to indicate that they were sprayed. 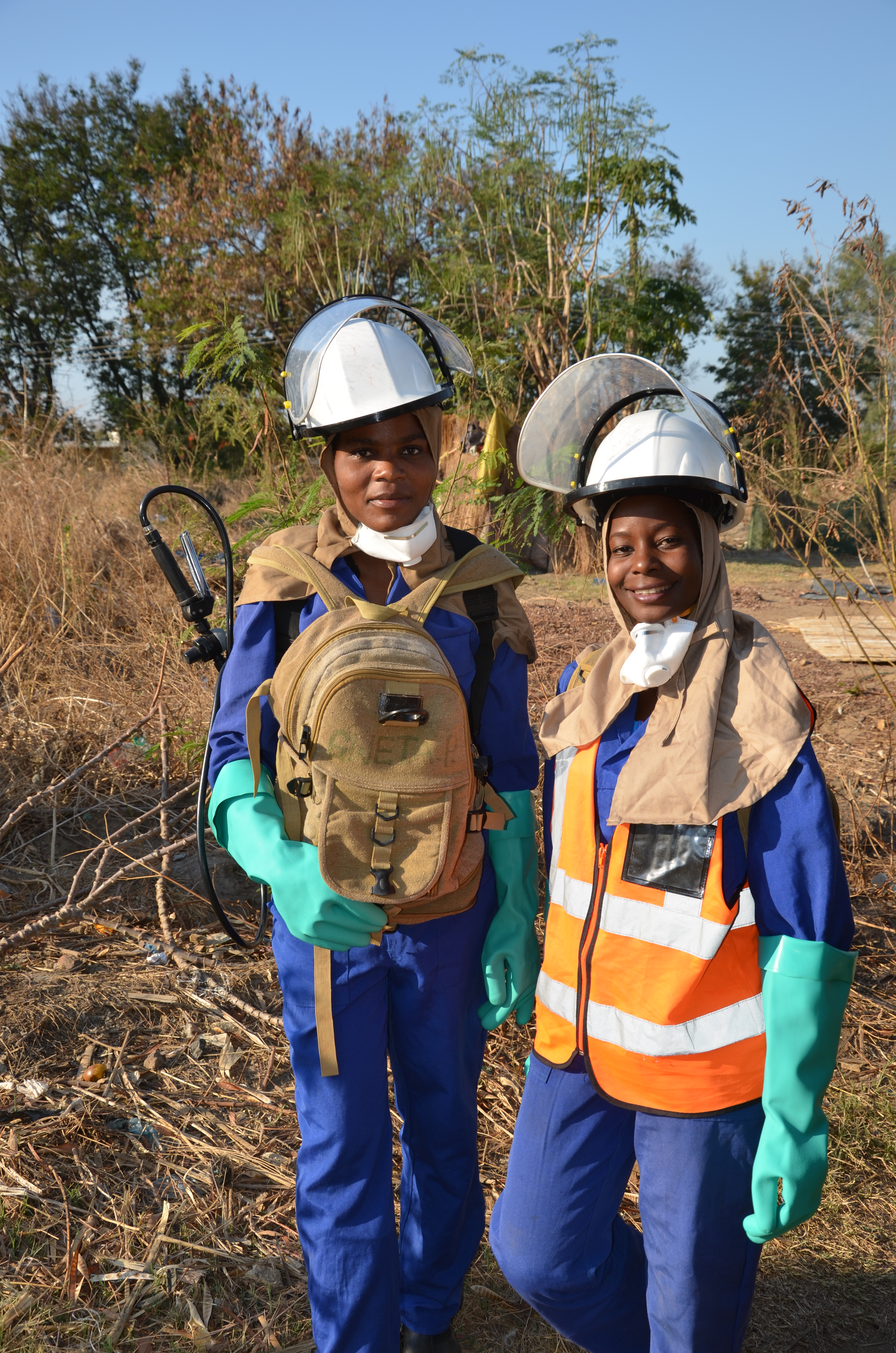 40 percent of PMI VectorLink Malawi’s seasonal staff were women. Promoting the role of women in IRS – an area that has historically been male-dominated – is helping to improve the overall economic power of women. 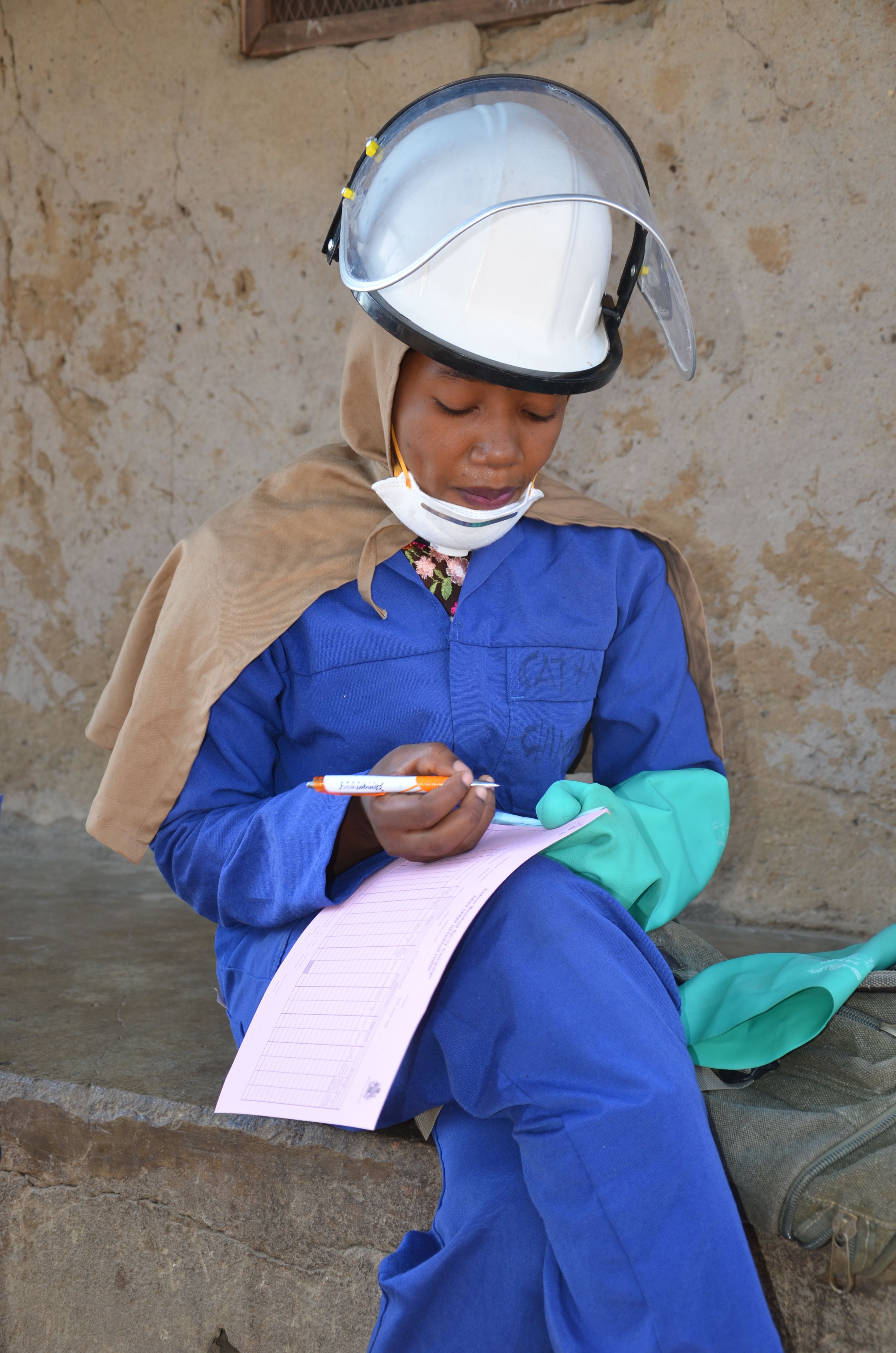 PMI VectorLink actively encourages the hiring of women. “It’s important to hire women and show that we can do just as good of a job as men,” said Spray Operator Jen Mwawembe. “I’m so happy to get paid. It’s made me feel secure to care for my family.” 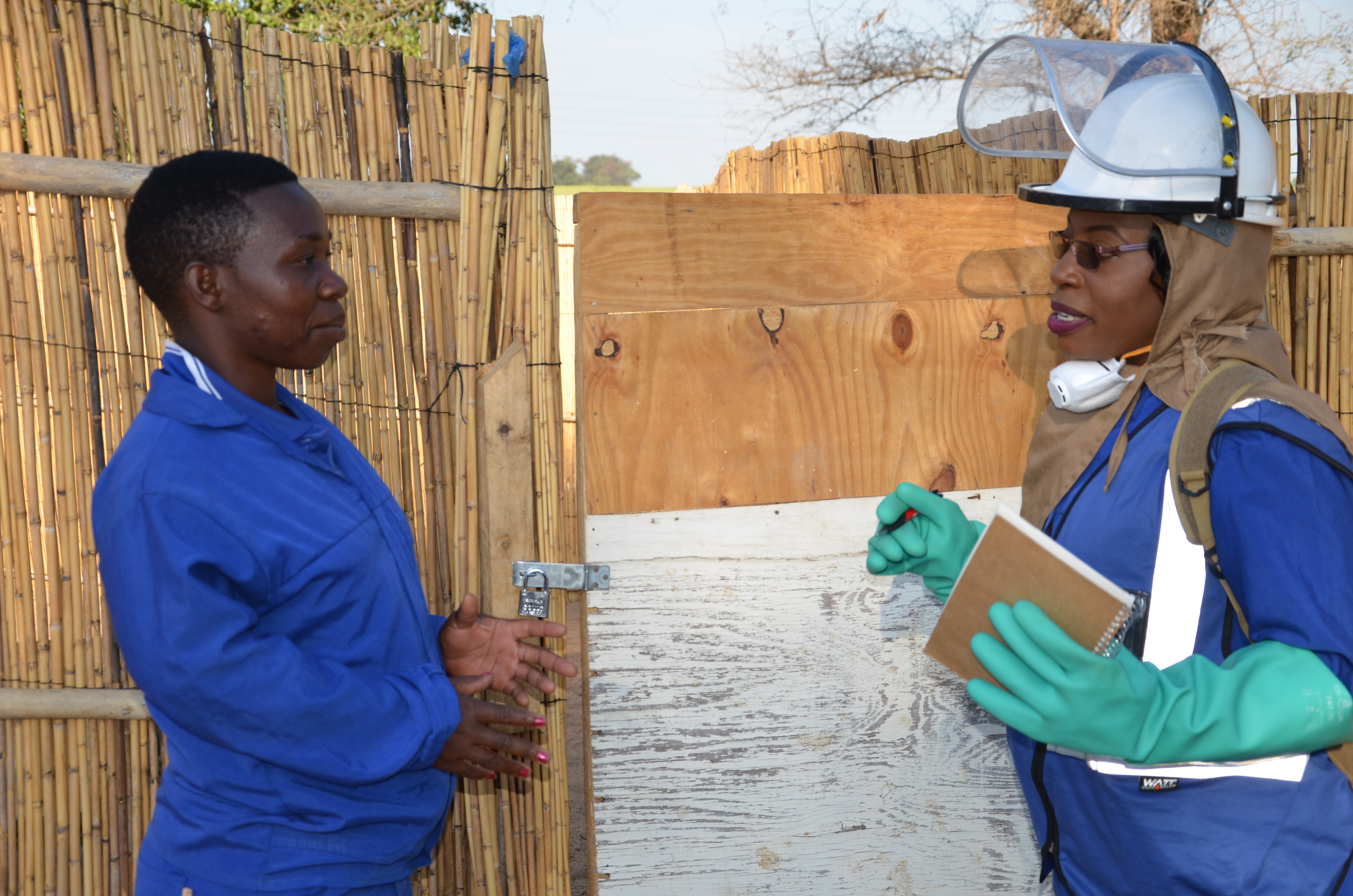 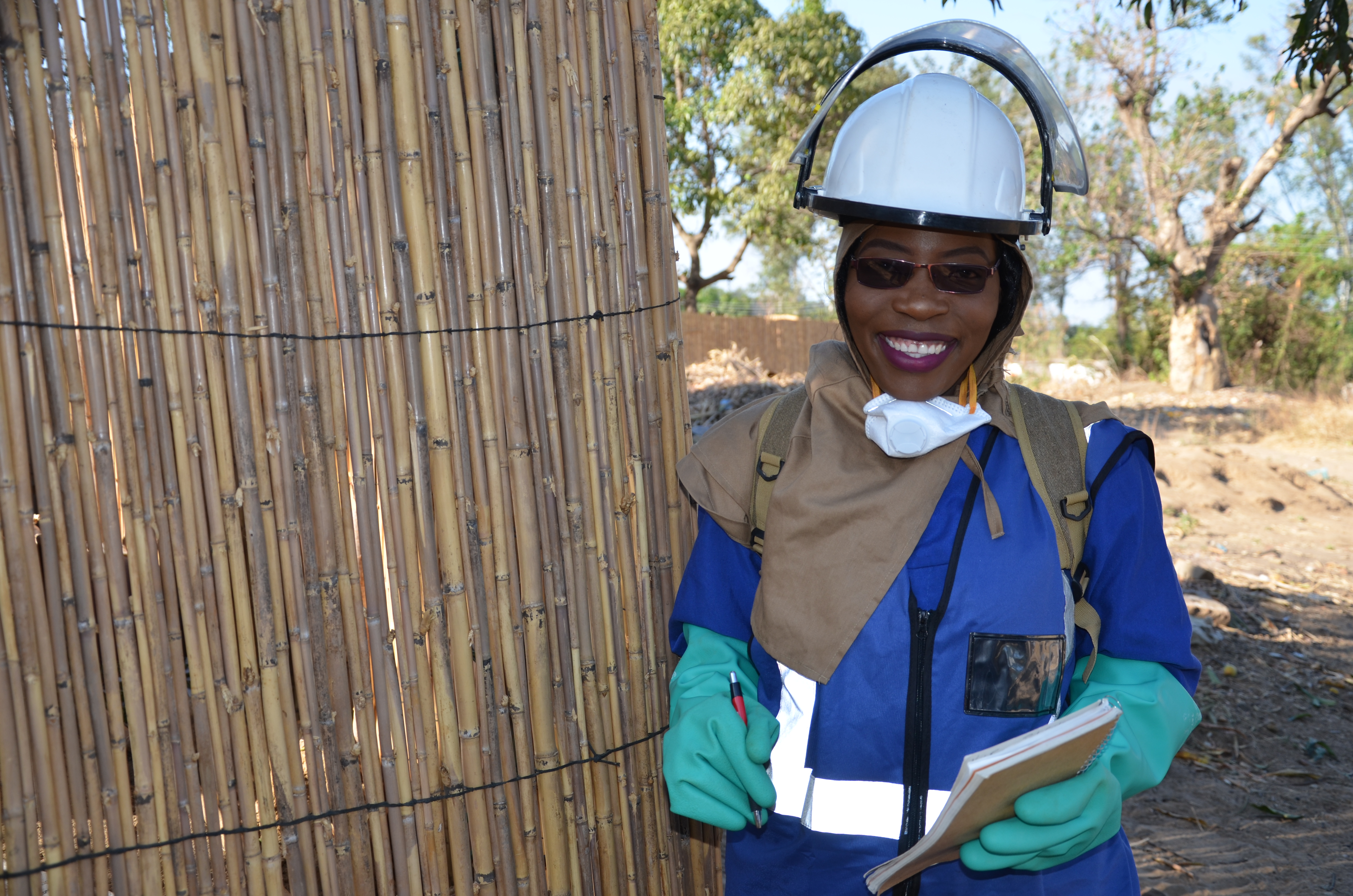 IRS Site Manager Agbethia Malenga at 29 years old manages 128 people. “At first I wasn’t sure I could manage more than 100 people,” she said. “But my husband encouraged me. I love my job and it’s important to me that this project helps to protect people from malaria, particularly the most vulnerable – pregnant women and children under five. I’ve learned a lot in my job. My team comes from many different cultures and speaks six different languages. I learned how to manage different kinds of people. One spray operator said he couldn’t work for a female team leader. I told him that if you have a problem with her, then you have a problem with me. He straightened up quickly. Some of the mothers in the community will point at me and tell their children, ‘Look at her. She’s a woman and in this important job. If you work hard, you can do something important, too.’” 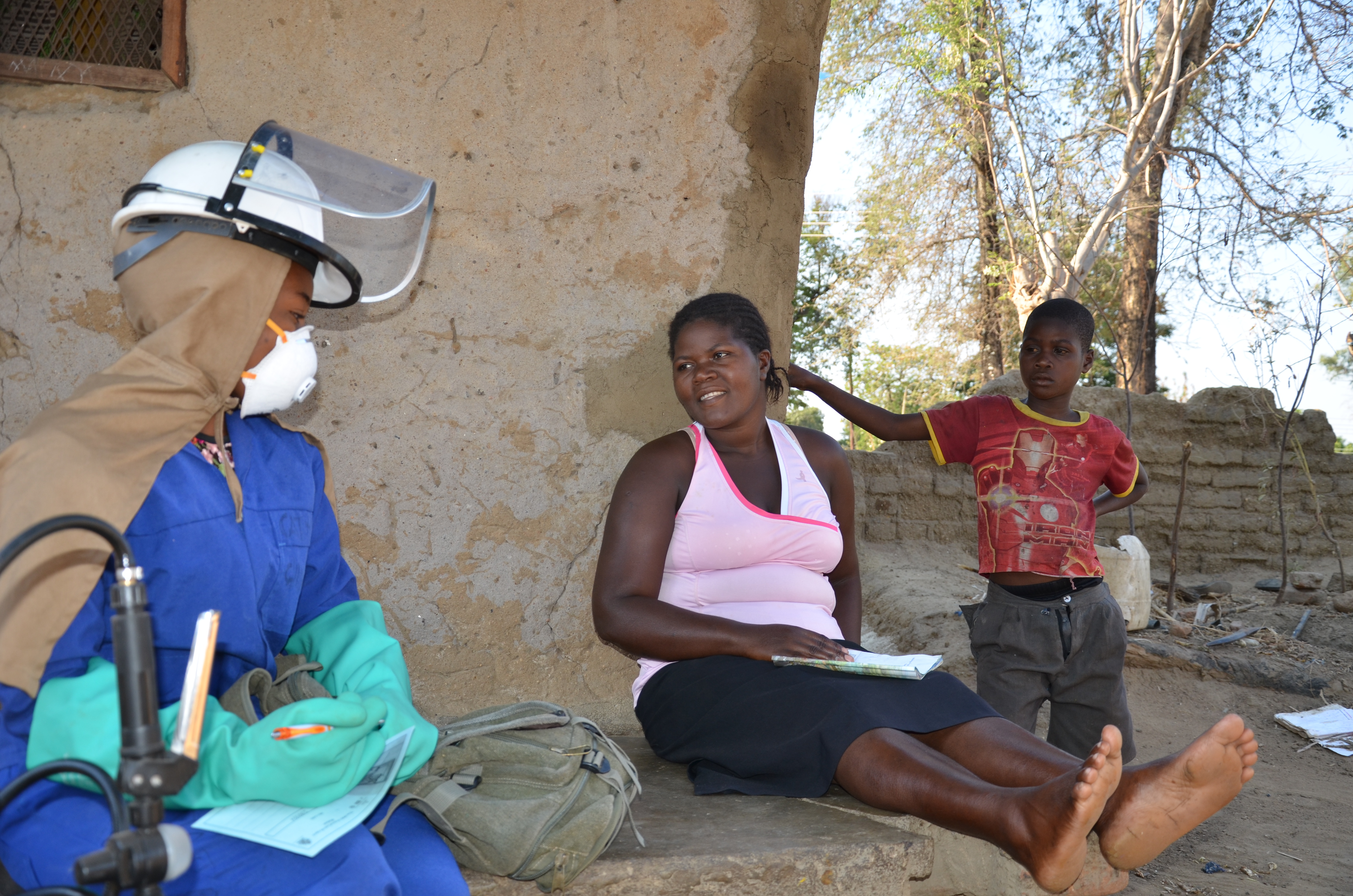 PMI VectorLink spray operators ensure households know how to prepare their homes for IRS and talk to the community about malaria prevention methods. 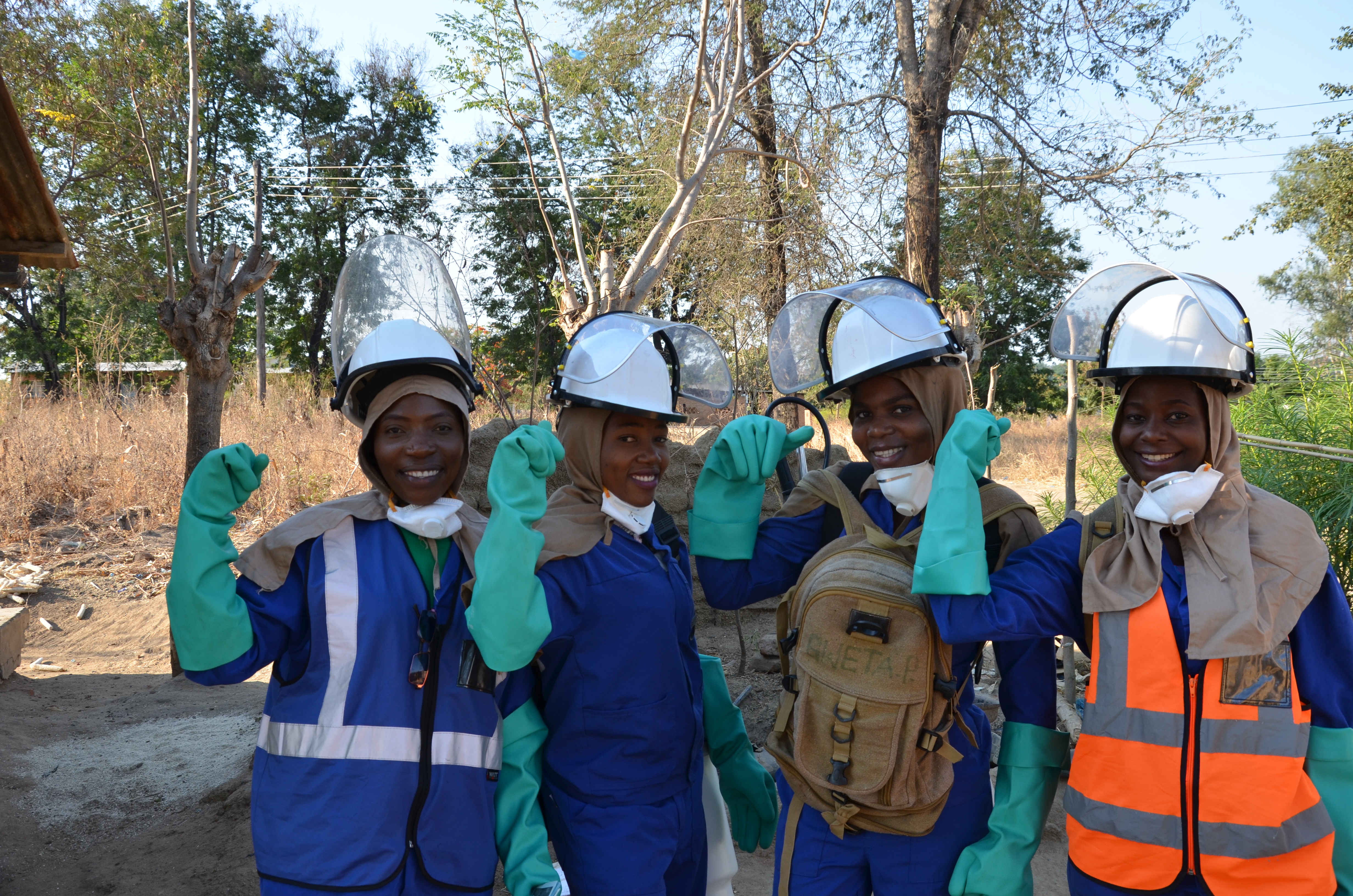 Four women fighting malaria: an IRS Site Manager, two spray operators and an IRS Supervisor. The women are using their income to pay for their children’s school fees, improve their homes from mud houses to ones built with cement blocks, buy seeds to plant maize for their family and invest in other income-generating activities. 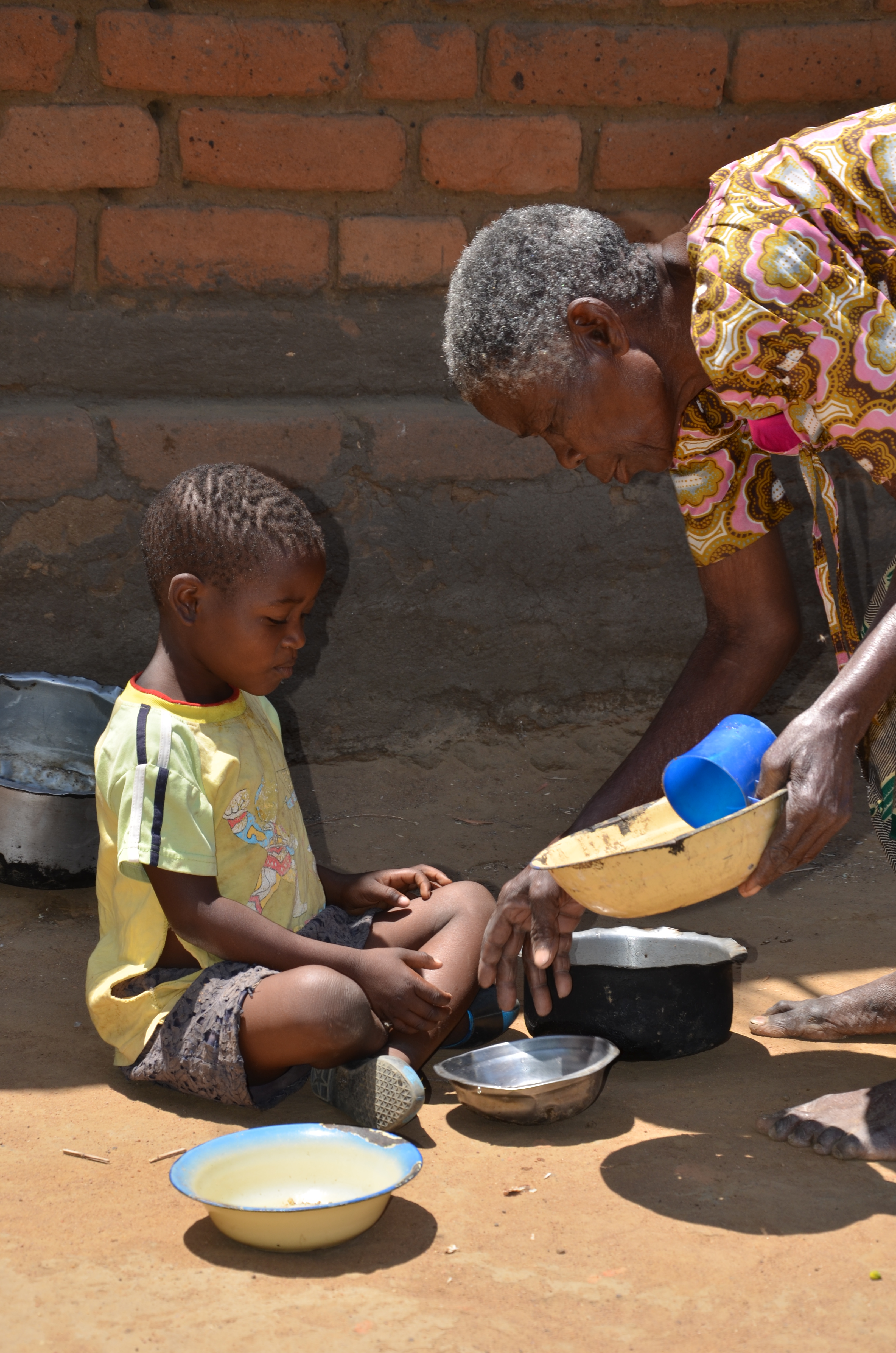 Dr. Michael Kayanga, Vector Control Program Manager for the National Malaria Control Program, said that PMI brought IRS back to Nkhotakota District because it’s one of the highest malaria-burdened districts in the country. “Children under five are expected to contract malaria twice in one year but more than once a month is common for children in this area. When sick so often, children can easily slide into malnutrition.” PMI VectorLink recently protected 501,324 people from malaria, including 11,066 pregnant women and 90,953 children under five.