World Malaria Day is celebrated worldwide on April 25th. It is a day where vector control stakeholders, national malaria control programs, international organizations, and individuals renew their commitments to finally ending this treatable and preventable disease.

Malaria continues to claim a significant number of lives: in 2017, 435,000 people died from malaria globally compared to 607,000 in 2010 (WHO World Malaria Report, 2018).” These figures illustrate how far we’ve come, and how far we have yet to go. Sharing our success and impact on this day inspires us all to continue this challenging work. Questions surface: How can we do more? Where can we improve? How can we save more lives? What will it take to end malaria for good?

The most important question remains, why?  Why, in such a challenging and complex landscape, do we continue to devote ourselves to this fight? What inspires us to continue to find new and innovative ways to tackle this complex disease?

This World Malaria Day, The PMI VectorLink Project joins the global vector control community in brainstorming new solutions that tackle these questions. But, we also want to take a moment and reflect on why we are committed to this fight.

Malaria is preventable and treatable – no one needs to suffer the burden of this disease.

Malaria kills more than 400,000 people every year, and millions more fall sick from this vector-borne disease. Young children and pregnant women are among the most vulnerable. Despite malaria’s crippling effects on people’s health, education, and employment, the world has seen major reductions in morbidity and mortality from malaria in the past decade. The majority of those gains have been in Africa and are primarily due to investments in vector control interventions by the U.S. President’s Malaria Initiative (PMI), the Global Fund, and country governments.

Working across 23 countries in sub-Saharan Africa as well as Cambodia, the PMI VectorLink Project is equipping countries to plan and implement safe, cost-effective and sustainable vector control programs, with the overall goal of reducing the burden of malaria.

Meet some members of The PMI VectorLink team. Together we have dedicated decades to fighting malaria. We all have our “why?” Each one of us has an individual reason as to why we are committed to end malaria. Our whys bring us together as a fortified team devoted to this fight because we want to do the most good for the world’s most vulnerable people. No one needs to suffer the burden of malaria. 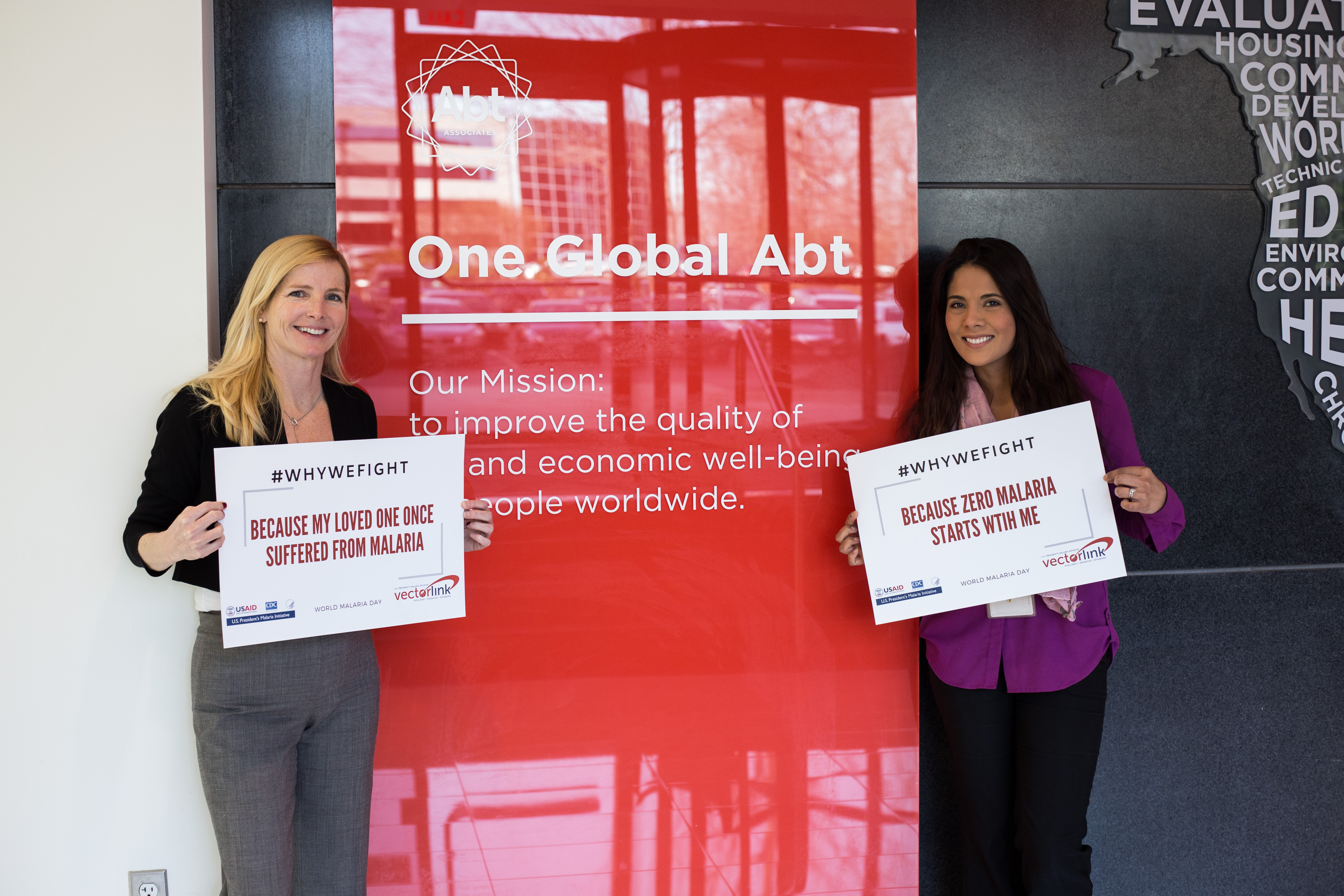 Laura McCarty (left), Director of Communications and Ana Maria Paddack (right), Finance and Contracts Manager. Having watched a family member suffer from malaria and friends die from the disease, Laura is committed to raising awareness about the importance of fighting this treacherous disease. Ana Maria has been working in malaria vector control for nearly seven years. She feels that “a child’s right should be to enjoy a healthy and happy childhood rather than to be threatened by illness, poor growth and even death. We can save lives and promote economic development by protecting women and children under five against malaria.” 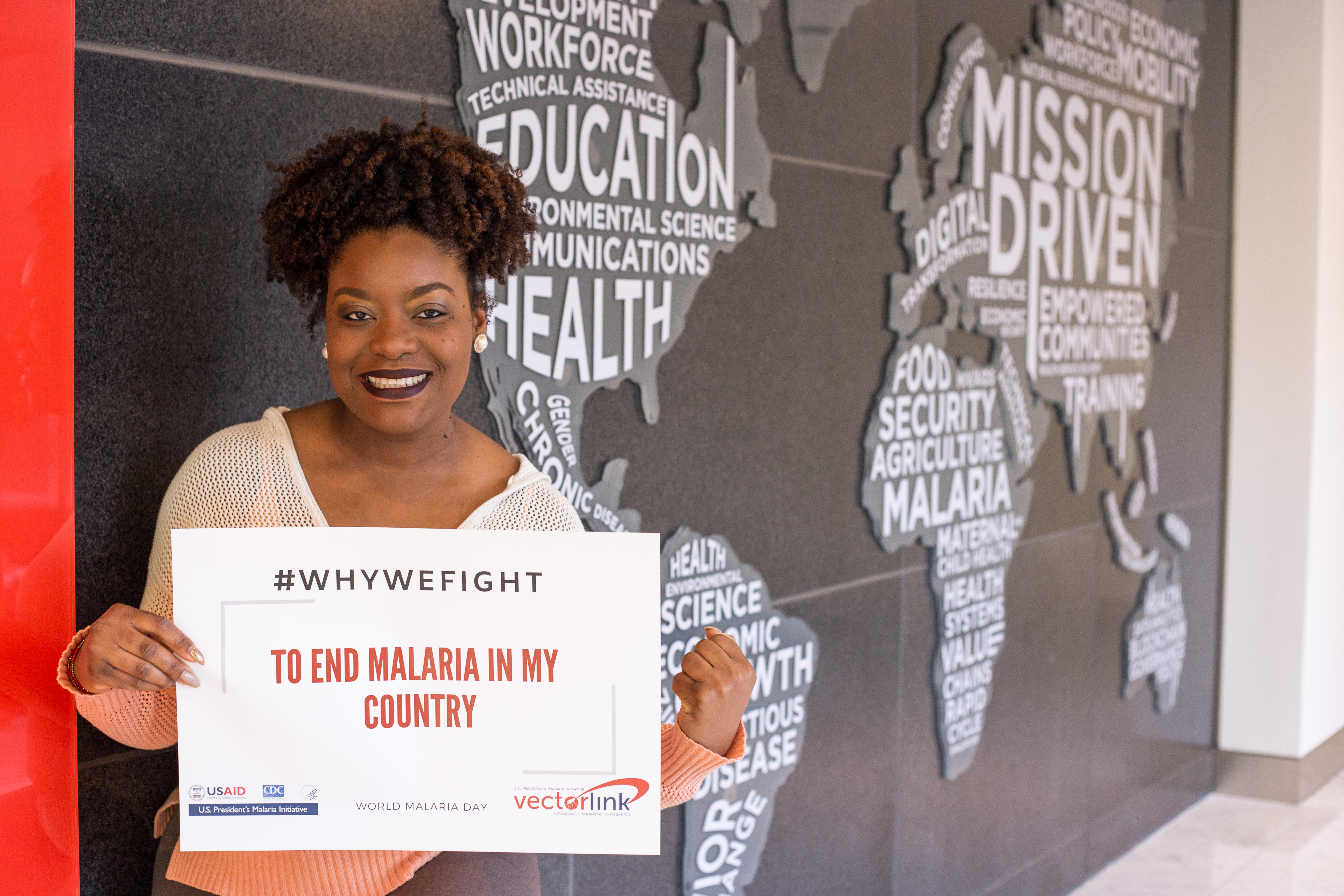 “My name is Kizi N’Kodia and I’m the Senior Procurement and Logistics Specialist on the PMI VectorLink Project. I have been part of this project for a little over a year now and I am committed to fighting malaria to put an end to its deadly impact around the world.” 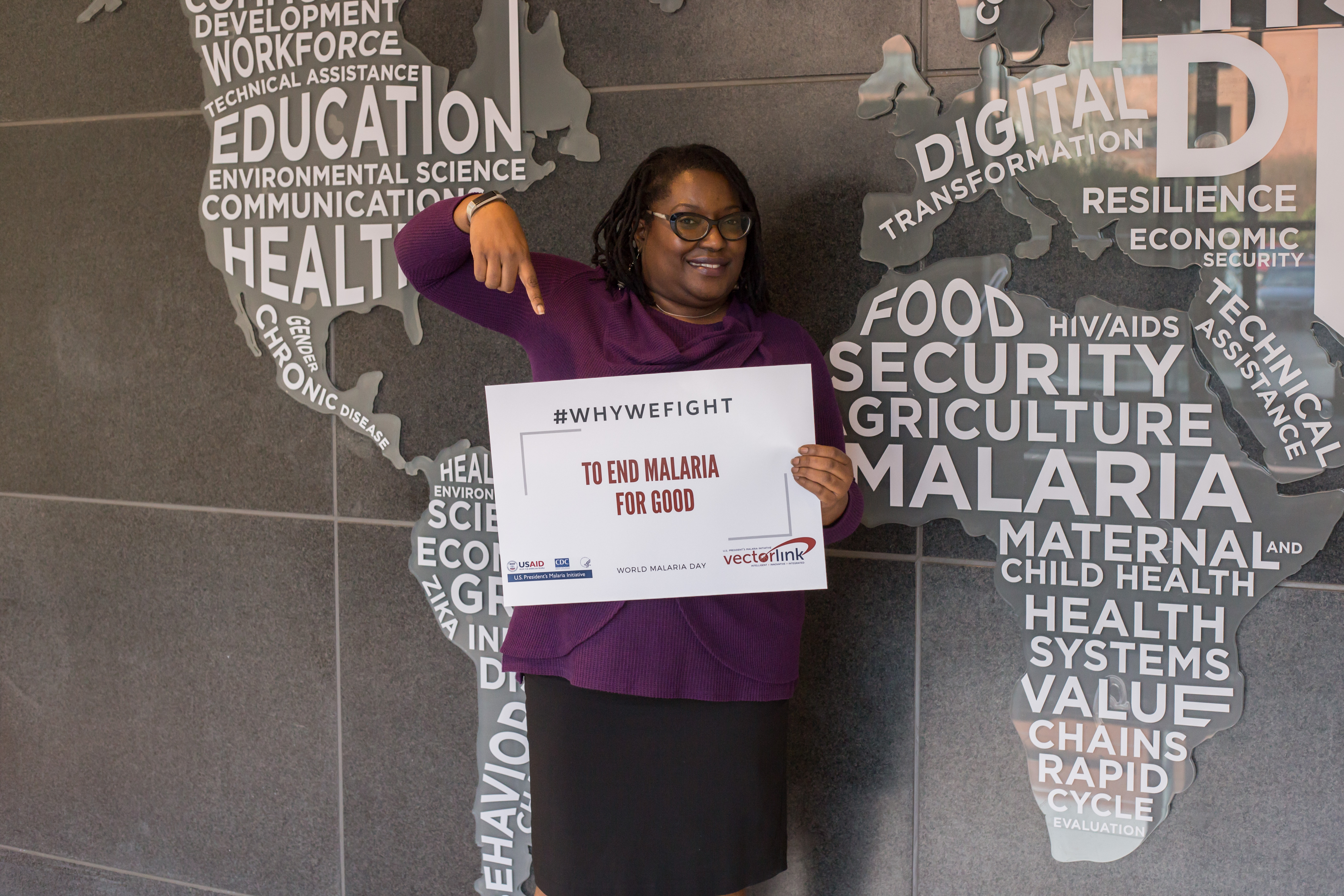 This is Miriam Mokuena, Finance and Contracts Analyst and Technical Program Manager. Her work fighting against malaria started in 2011 under the PMI AIRS project (a predecessor to PMI VectorLink). She is fighting malaria because she believes that people should be able to live to their full potential without being hampered by severe illnesses. 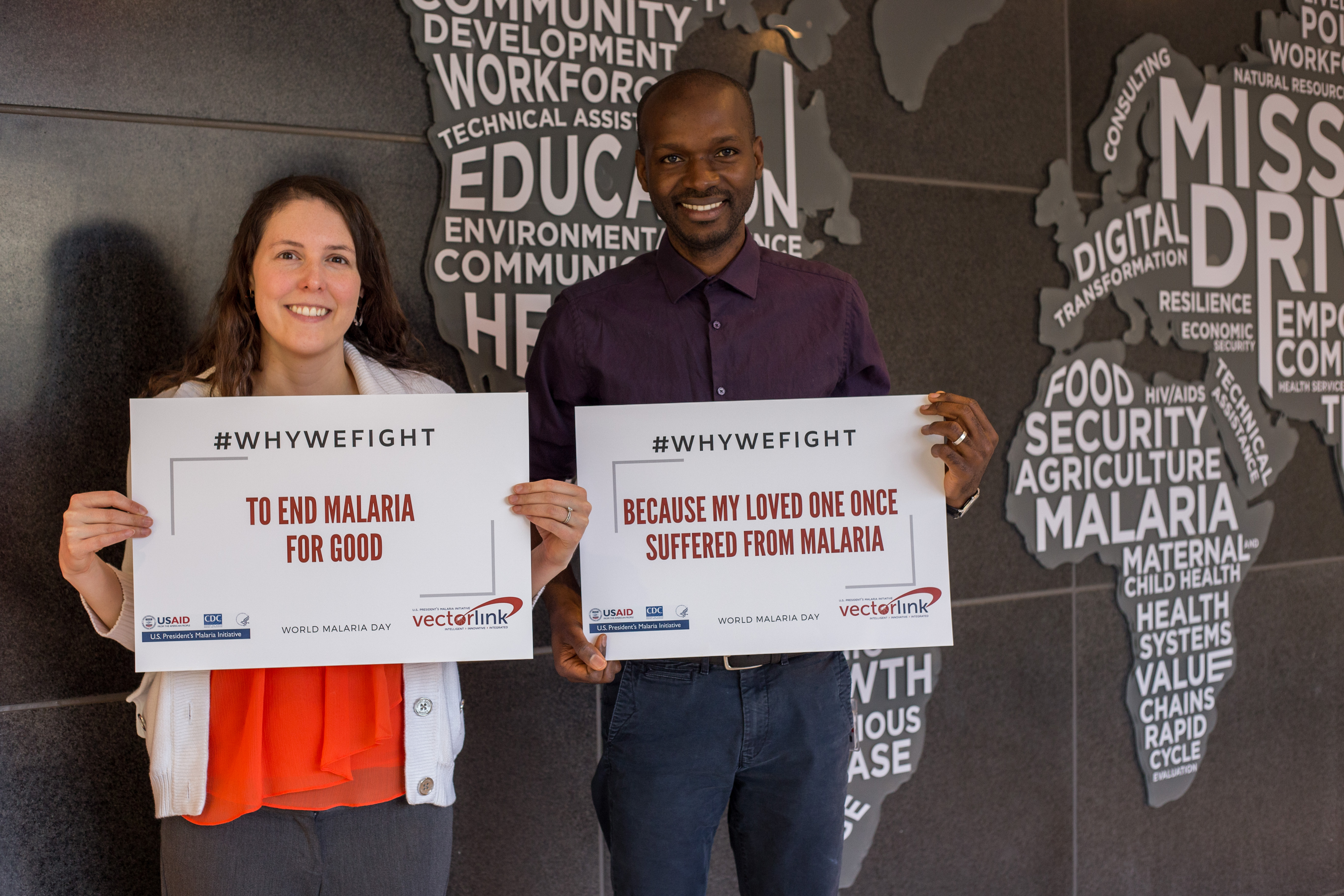 This is Megan Tammaro (left) and Abdoulaye Bangoura (right), they’re both part of the Monitoring and Evaluation (M&E) team on the project. Meghan has been a part of the team for nearly three years. “Malaria disproportionately impacts the lives of pregnant women and children under 5,” she says. “I have a strong interest in maternal and child health so working on this project has been a great way to not only make an impact across the population of Sub-Saharan Africa but particularly amongst those who are affected by malaria the most!” Abdoulaye has been with the project for 1O months now. He wanted to be a part of the fight against malaria because he has lost loved ones at the hands of malaria. 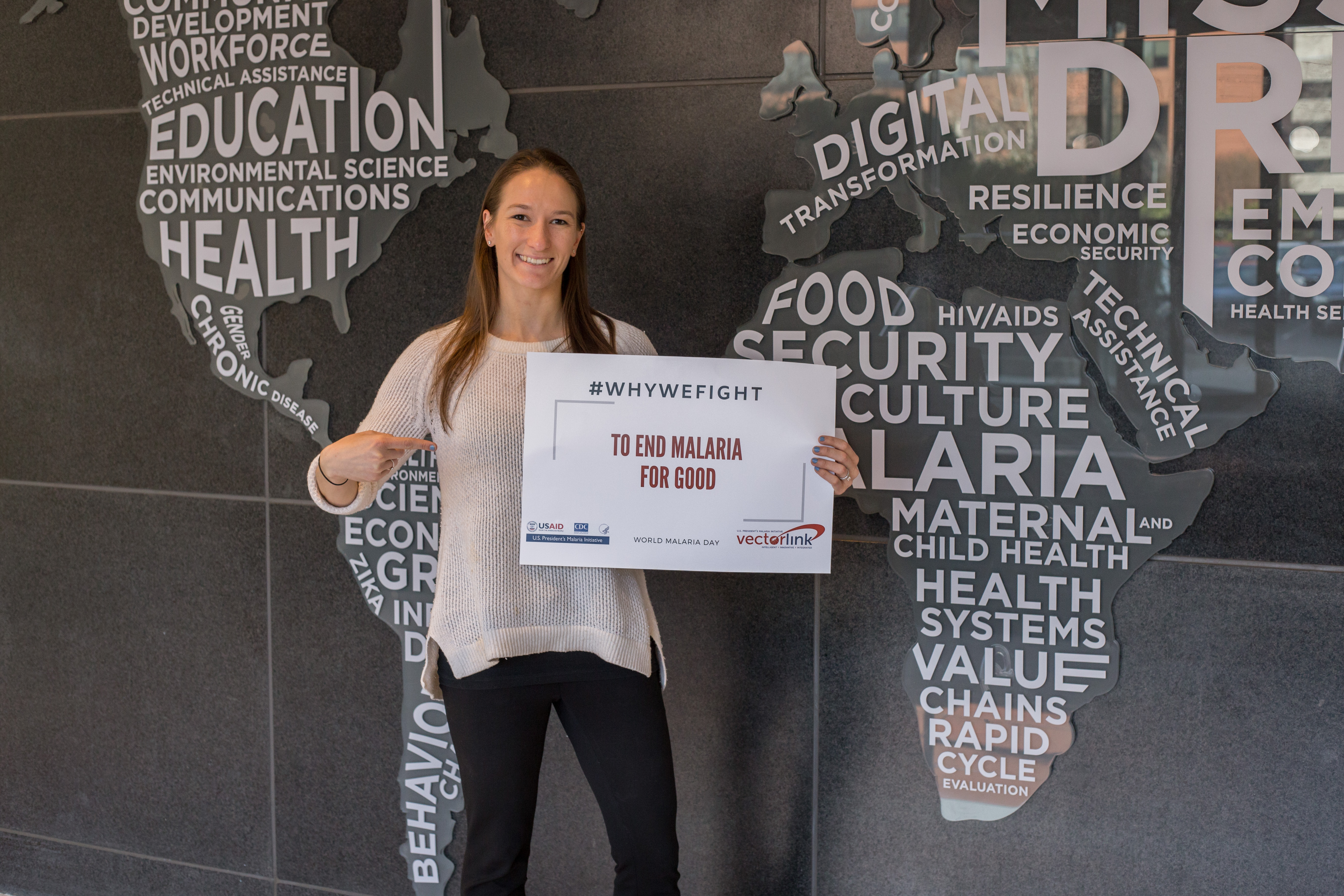 “My name is Lilly Siems and I am a Monitoring and Evaluation Specialist on The PMI VectorLink Project. I have been working with the team for five months and I fight malaria because we have the tools to eliminate this disease and the chance to create a better world for the future.” 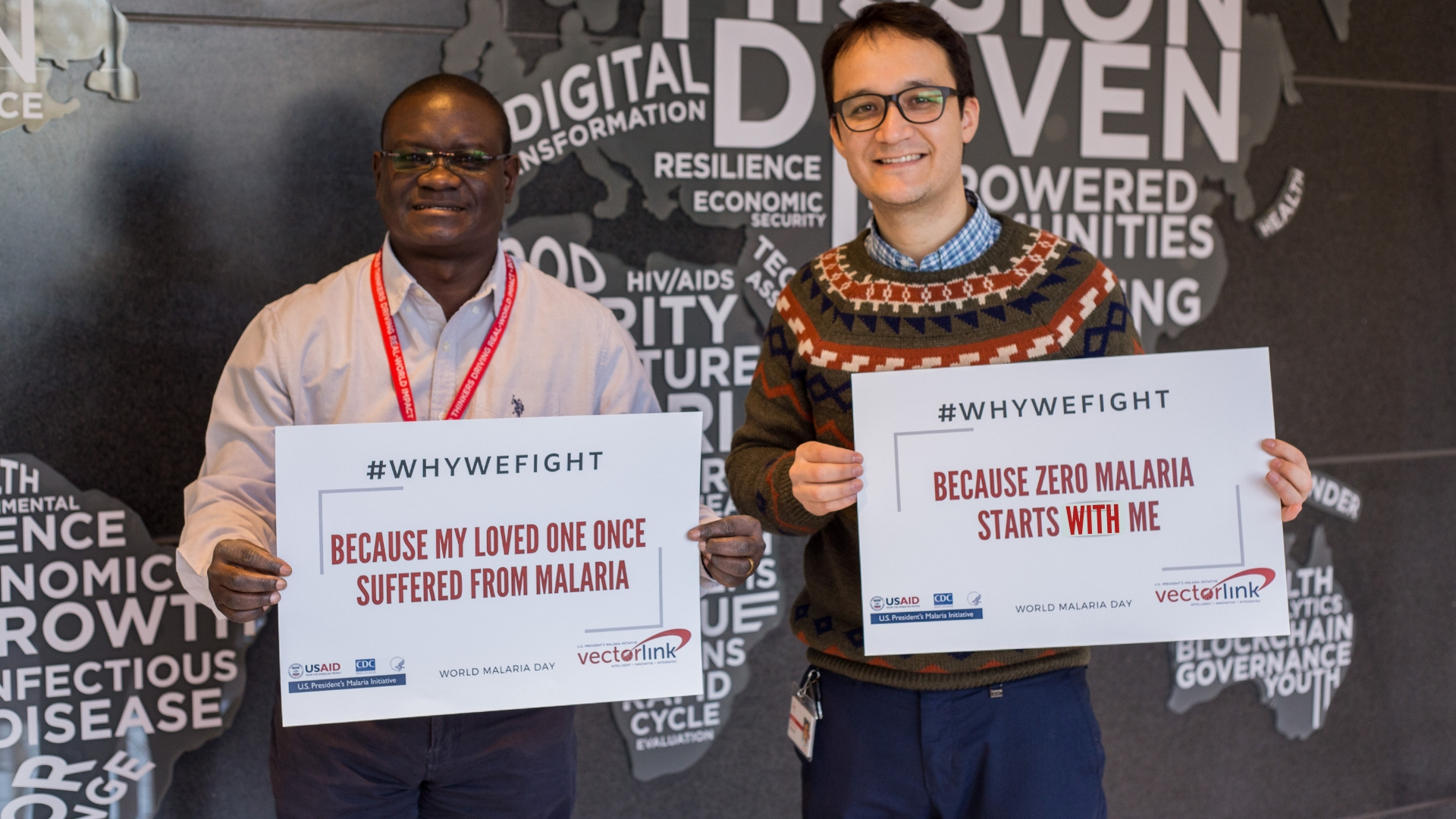 Allan Were, Director of Vector Control (left) and Bezhan Muradi (right), Project Assistant. Growing up in Uganda, yet another malaria-burdened country, Allan suffered from the disease several times. “I saw firsthand its debilitating effect on others, especially children. That’s what drives me to stay in the fight,” he says. Allan has worked in vector control for nearly 8 years and continues to stay committed to ending malaria. Bezhan has been with the PMI VectorLink Project for a year now. Growing up in Afghanistan, he’s known many people who have been infected by the disease. That is what keeps him committed to fighting against malaria, every single day. 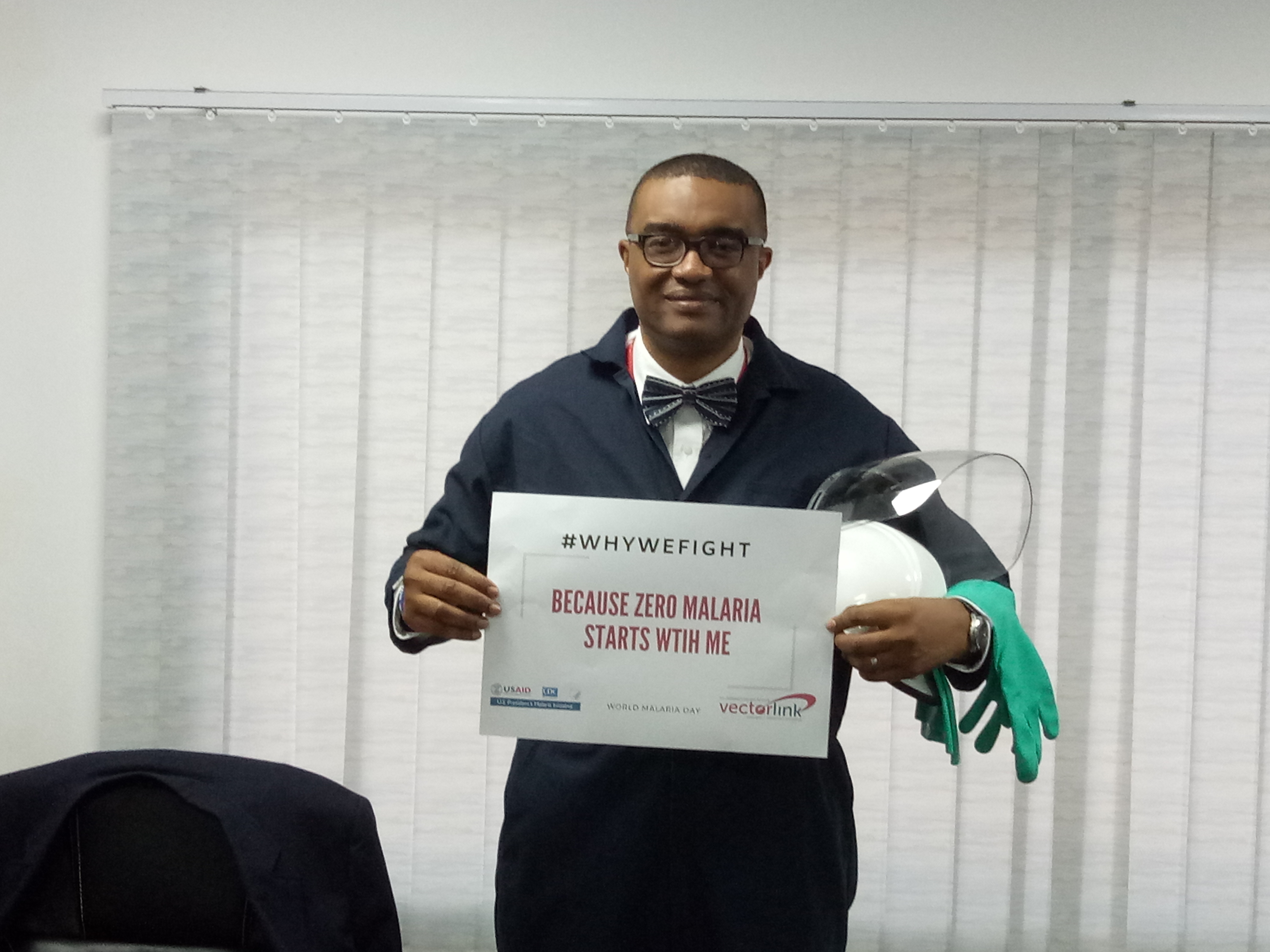 “Coming from Nigeria, a country that accounted for a quarter of all malaria cases globally in 2017, I have experienced firsthand, the needless and avoidable deaths of pregnant women and children due to malaria. The statistics for malaria cases and deaths in sub-Saharan Africa is worrisome. All hands should be on deck to rid Africa of this scourge”. – Dr. Nduka Iwuchukwu, Chief of Party for PMI VectorLink Zambia. 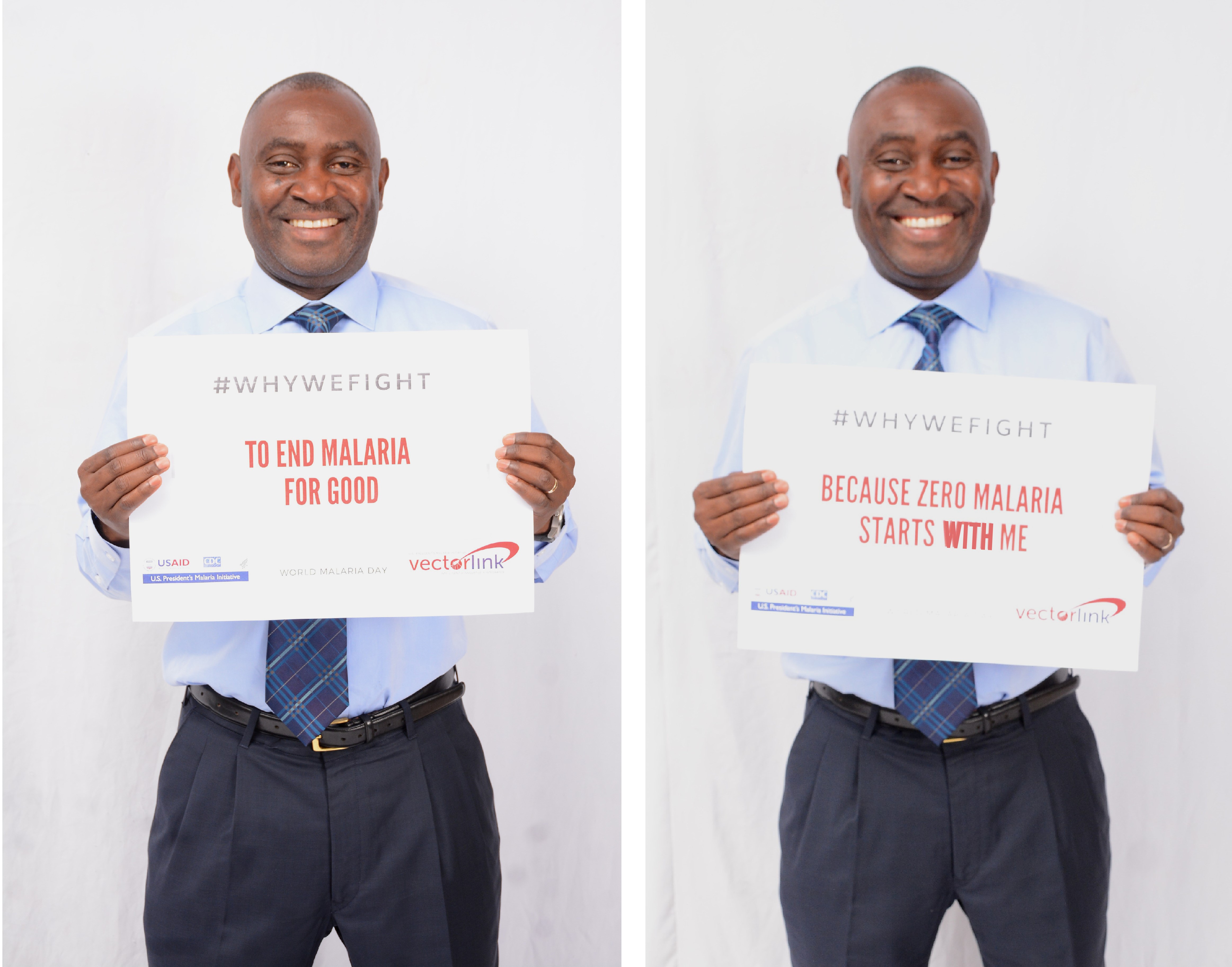 Peter Mumba is a Doctor with a Master’s of Science in Infectious Diseases (Malariology). He managed complex public health programs for 14 years, including nine years in malaria control programming in Zambia, Ghana and Ethiopia. Dr. Mumba is currently the Chief of Party for PMI VectorLink Ethiopia. As a physician, he has a passion to eliminate malaria because he understands how devastating the malaria disease can be to the community. Dr. Mumba lives in a malaria-endemic country and therefore supporting malaria control and prevention is a priority for him to ensure elimination. That is why he is excited to lead the PMI Vectorlink Ethiopia team. Studies show that IRS is one of the most effective proven interventions for elimination of malaria in communities. 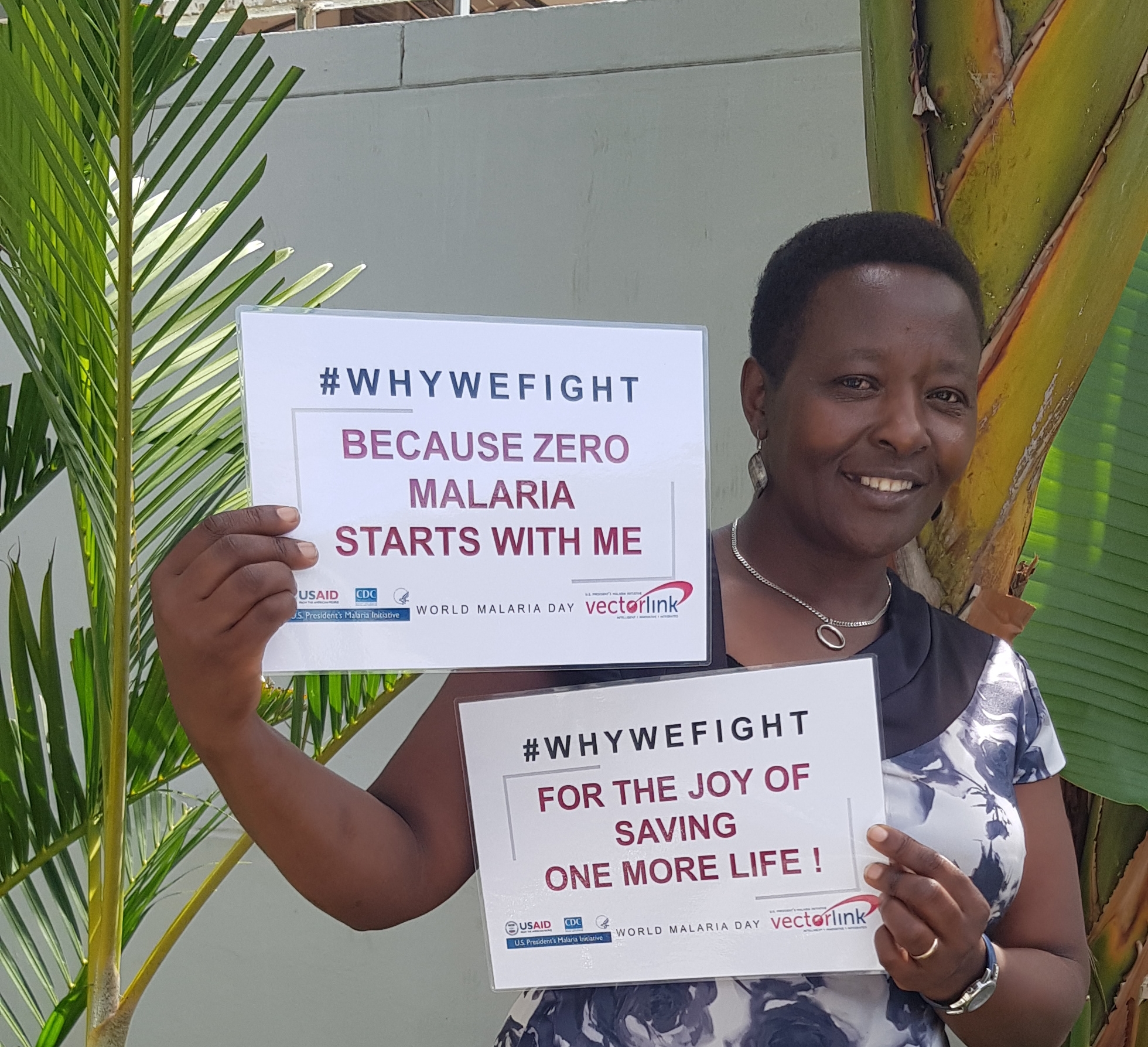 “I have over 15 years of experience in health, ten of which are in malaria vector control. As a medical entomologist by profession, I enjoy working with the community in matters of health. I am passionate about mentoring upcoming health leaders. Formerly, as Chief of Party of the AIRS Rwanda project, I led my team to successful implementation of Indoor Residual Spraying (IRS). It was very inspiring to see the prevalence of malaria in the districts where we worked, and throughout the country in general, go down. I am currently the Chief of Party of The PMI VectorLink Project Mozambique, implementing IRS in conjunction with the Mozambique National Malaria Control Program. My greatest inspiration in working in the field of malaria control is the contribution to save one more life; this gives me a lot of joy.” – Rodaly Muthoni, Chief of Party PMI VectorLink Mozambique. 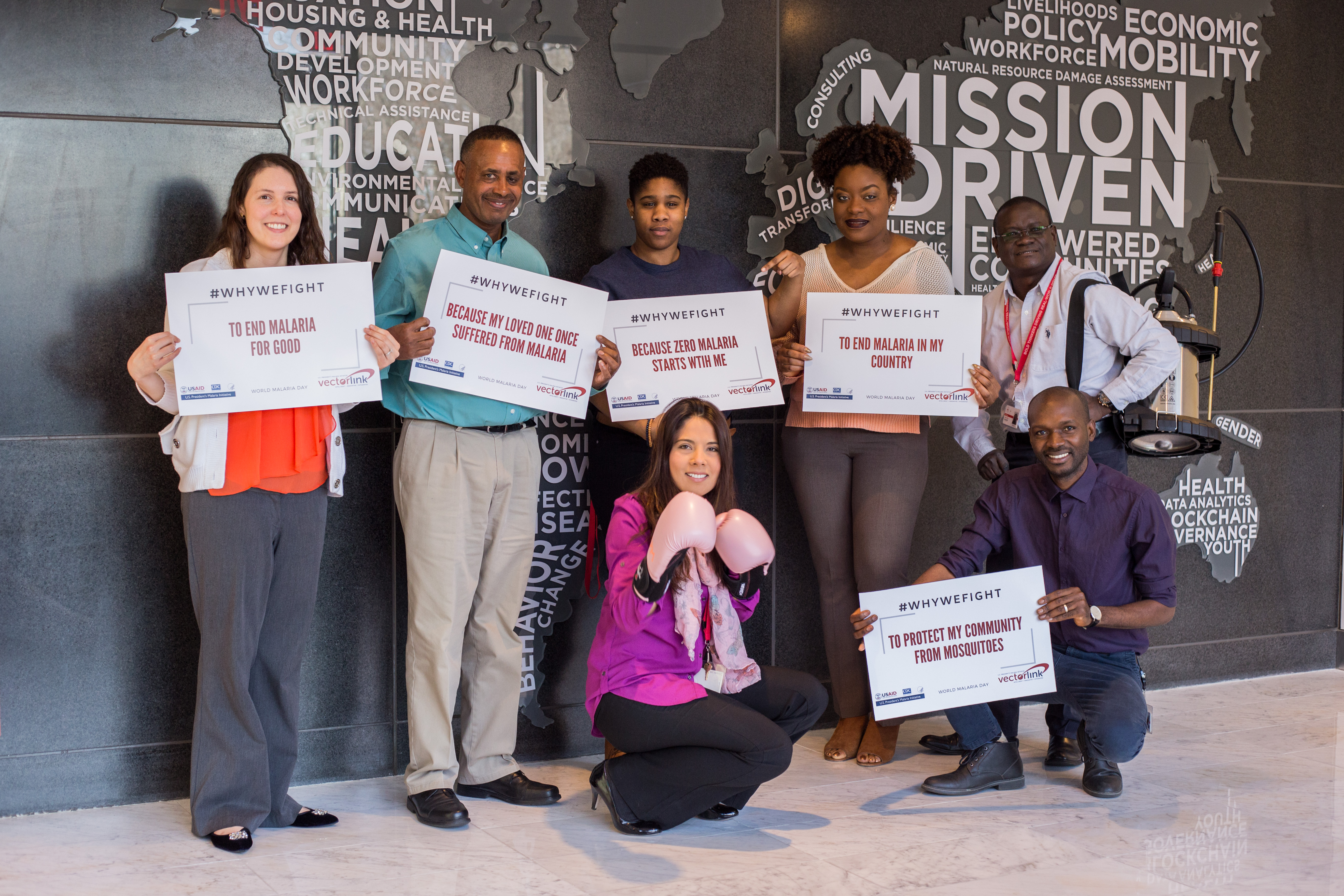 We are committed to the fight against malaria because we want to do the most good for the world’s most vulnerable. No one needs to suffer the burden of this preventable disease.