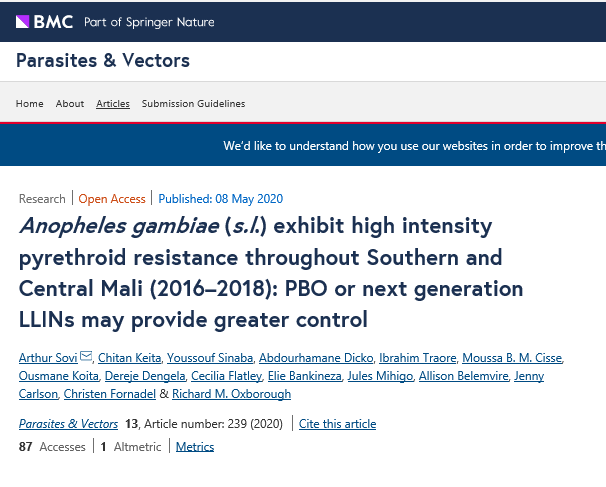 PMI VectorLink recently published an article in Parasites & Vectors on the malaria vector Anopheles gambiae’s high level of resistance in Mali to the pyrethroid insecticide and how PBO nets or next generation long-lasting insecticide-treated nets (LLINs) could provide greater malaria control.

The study reported that “Millions of pyrethroid LLINs have been distributed in Mali during the past 20 years which, along with agricultural use, has increased the selection pressure on malaria vector populations. This study investigated pyrethroid resistance intensity and susceptible status of malaria vectors to alternative insecticides to guide choice of insecticides for LLINs and IRS for effective control of malaria vectors.”

The study concluded that “Widespread high intensity pyrethroid resistance was recorded during 2016–2018 and is likely to compromise the effectiveness of pyrethroid LLINs in Mali. PBO or chlorfenapyr LLINs should provide improved control of An. gambiae (s.l.). Clothianidin and pirimiphos-methyl insecticides are currently being used for IRS as part of a rotation strategy based on susceptibility being confirmed in this study. Read the article here.