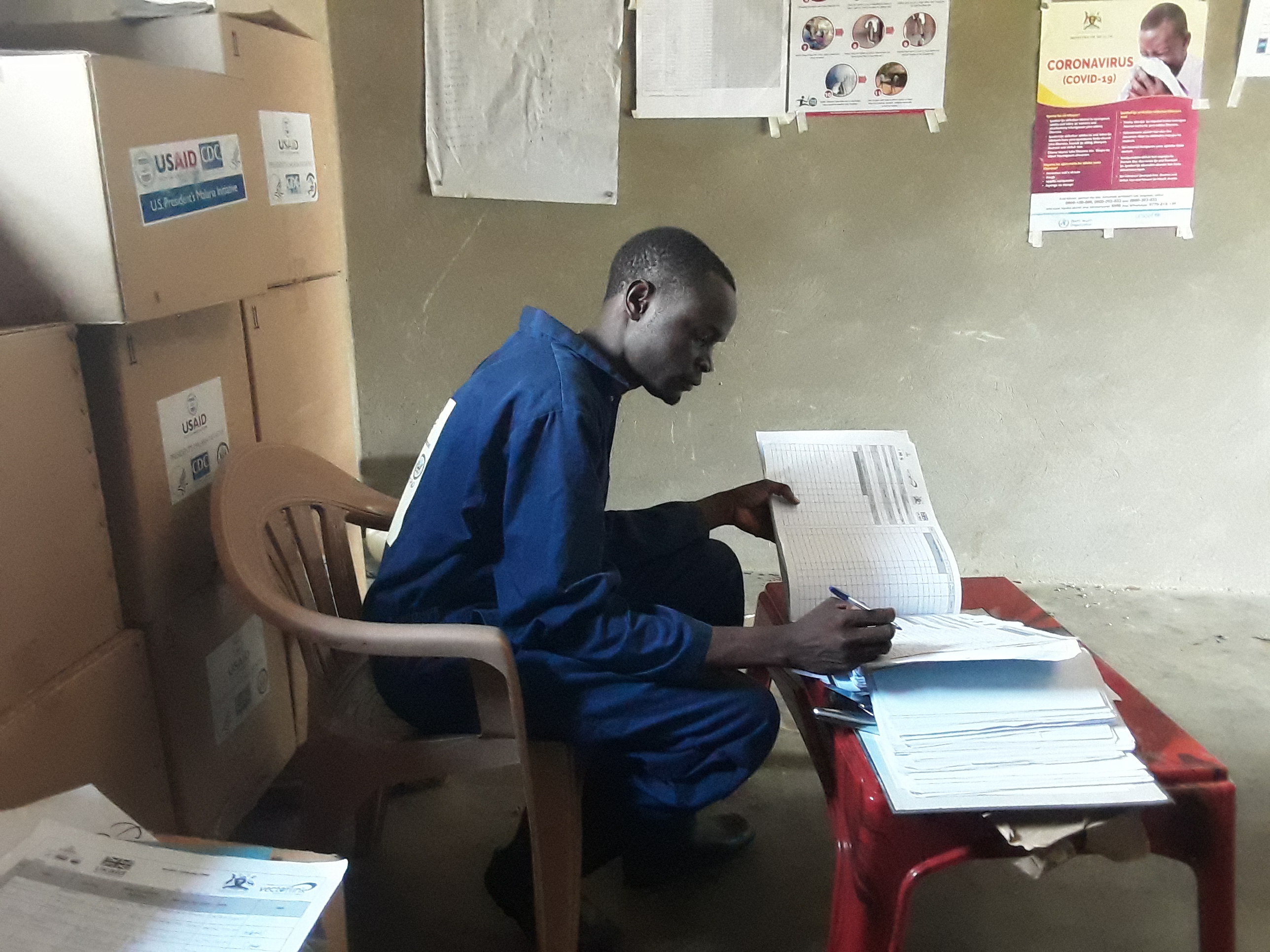 Uganda
In Eastern Uganda’s Serere District, Ojok John works for the PMI VectorLink Project as a storekeeper for indoor residual spraying (IRS) campaigns. When not working on an IRS campaign, Ojok attends to his small-scale farm and volunteers with the village health team at the Adepi Village health center where he supports the outpatient department in the antiretroviral therapy clinic and immunization clinic to serve his community. Recently, PMI VectorLink’s Information, Education and Communication Coordinator Daniel Eninu spoke with Ojok about how malaria has affected Ojok’s community and how his earned income from fighting malaria has changed his life.

Can you talk a bit about how malaria has affected your life?

Malaria has affected my life in many ways. The community and my close relatives have been affected through deaths of loved ones, especially children. Malaria also has taken away our little income earned to pay for treatment, which should have been money for household growth. The disease has also affected my family through loss of time at work when we are sick or caring for others. As a Village Heath Volunteer, I can confess that malaria is a serious health problem in my community. I have witnessed children and mothers die of the disease. We live near a lake so my community has several mosquito breeding habitats that encourage breeding of the malaria vectors. But since 2015 when IRS began, I have witnessed a reduction in deaths due to malaria in my village.

Have you ever had malaria? If so, can you talk about it?

Yes, I have had malaria a number of times. It has been an agonizing experience with lots of fever, headaches, vomiting, among many other symptoms. I had to struggle to get to the nearby clinic where I was tested and given medication for treatment.

What have you learned from working with the project?

I have learned a lot, such as strategies for fighting malaria, including IRS, use of insecticide-treated nets (ITNs), visiting health facilities as soon as symptoms are noticed, and ensuring that pregnant mothers visit facilities for antenatal care and testing for malaria before treatment. I have a lot of experience in managing store documentation or records in IRS working as a storekeeper. I can also handle logistics within store settings. As an IRS team leader, I’ve gained the experience of interacting and mobilizing communities for IRS and other health actions leading to behavior change, especially with how to deal with difficult communities.

How has your job changed since being promoted to storekeeper?

While I was a spray operator, much of the work was to ensure I sprayed houses appropriately. This gave me a lot of opportunity to interact with the community. I learned that trust and dedication are critical as I worked in people’s houses. This level of commitment helped me to be noticed and promoted to a team leader and later to storekeeper. As storekeeper, I have been entrusted with important and expensive project equipment and supplies. I also have been able to manage spray teams to achieve targets and produce results at the end of spray campaign.

How has working on the project changed things for you?

The income I received from the project enabled me to register as a private candidate to complete my secondary education in 2017. Without IRS, I would not have managed to complete my education. This is a great achievement for me, and I hope to join a vocational college in the future. The opportunity provided to me by USAID/PMI, District Health Team/Ministry of Health and the local council has really changed my life. The financial earnings I receive each spray campaign also enabled me to construct three temporary houses for my family and also buy two bulls, which I use for ploughing during the planting season thus earning me extra income.

How have behaviors changed in your community?

At the beginning of spray activities there were a lot of myths around insecticide use, including causing men to become impotent and women to become barren, which caused resistance. But with a lot of health education and sensitization from local leaders on the benefits of IRS these myths were addressed and people accepted spraying their houses to protect themselves from malaria. The integrated messages on malaria we provide to the communities have led to improvement in use of the malaria control measures such as use of ITNs, visiting health facilities early for testing and treatment, and draining stagnant water pools to eliminate breeding of mosquitoes. My community, I would say, is adopting healthy behaviors.

Are fewer people getting sick and how has the community responded?

Since the start of IRS and distribution of ITNs, the number of people getting sick and visiting health facilities has drastically reduced. People are able to spend more time on productive activities. The community has responded well since they have realized the benefits of malaria prevention.

What do you find most challenging about your job?

The biggest challenge of being an IRS storekeeper is managing spray teams with people from different backgrounds and different levels of motivation. I have learned how to deal with difficult people so that our work of IRS proceeds. The work involves ensuring proper store records are kept at all times.

What do you find most rewarding?

The most rewarding thing is the skills that I have attained over time in store management, which I think can take me to another level of working in other logistical management jobs. Besides the reward of revenue earned, I have learned how best to work within a large and busy organization such as the PMI VectorLink Project.

What might someone be surprised to know about you?

Someone may be surprised to know that despite dropping out of school due to lack of school fees I hold a secondary level education certificate, all through my dedication and earnings from IRS.

What are your hopes and dreams for the future?