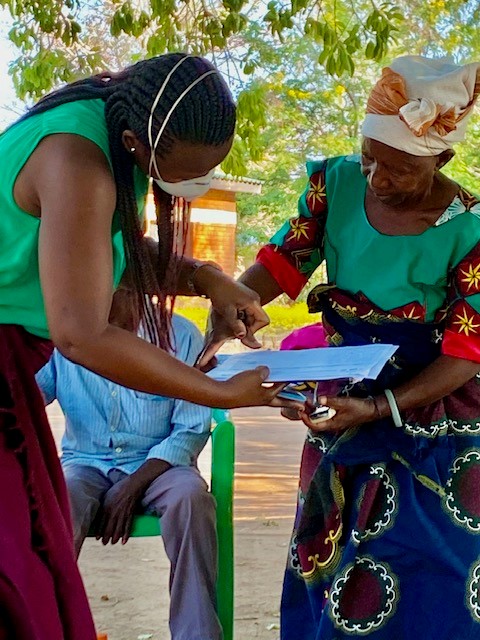 Malawi
Patricia Chirombo knows a hard day’s work. Starting her days as early as 4 a.m. during indoor residual spraying campaigns and ending often late in the night, Chirombo serves as the Information, Education and Communication (IEC) Coordinator as well as Gender Focal Point for the U.S. President’s Malaria Initiative (PMI) VectorLink Project in Malawi. She’s dedicated to delivering the right message to the right audience via the right media channel at the right time. Sometimes that means drafting mass media messages late at night to address concerns raised during the campaign that day so the next day is even more successful.

Chirombo, who grew up in Nsanje District in the Lower Shire River Valley, received her Bachelor of Science for Environmental Health from Polytechnic College at the University of Malawi. She has seen the rewards of her work with malaria incidence 50 percent lower in 2020 in Nkhotakota District compared to 2018 when the project began implementing IRS in the district.

Recently, after a long day in the field, Chirombo took time to speak about her work with the project.

What is your experience with malaria?

My career started as a Health Promotion and Communication Officer in 2003 with Catholic Development Commission of Malawi (CADECOM). Part of my role was to encourage mothers to promptly seek medical care for their sick children. There was a malaria component to the job. From there, my passion for malaria prevention grew.

Also, malaria affects me and my family. When my son was two years old (in 2012), he had malaria with diarrhea. He didn’t respond to the first line of treatment and was admitted to the hospital for four days. It was a bad experience for me as a mother with my son admitted. Since then, it became a rule in my house that everyone has to sleep under a net. My family and I haven’t had malaria in five years. Before, it occurred once a year.

What are the biggest challenges to increasing understanding and acceptance of IRS?

In our first year (2018), acceptance was easy because people were excited. Malawi had not received IRS since 2012. But in the second year of the project, it was difficult to convince people to accept IRS because many also wanted insecticide-treated nets (ITNs) even though malaria incidence reduced after IRS. People often want nets instead of, or in addition to, IRS. There are many myths around both, such as IRS bringing bedbugs and ITNs causing infertility. Getting people to understand all the issues is difficult and we work very hard with our messaging to increase acceptance of IRS.

So the second year, it was a challenge to convince communities. This year, we made extra targeted efforts to engage local leaders, which made a big difference. They have really helped us. Community health workers have done a lot of work too, but village chiefs also played a big role because they asked their people to open up their homes for us to spray.

What have you learned from working with the project?

I’ve learned you need to be proactive. The IRS campaign is only 30 days, so it requires quick responses when faced with any challenges, such as homeowners refusing to have their homes sprayed. If you delay, you lose. In one day, you have to change and address issues to achieve the objectives you have. I’ve learned to bring everyone, particularly those who are influential, into action, which has helped improve my leadership skills.

What do you see as the most effective means of communication to evoke change in IRS?

The most effective, I think, is direct interpersonal communication because it allows you to share information directly with the homeowner, to listen to their concerns and then to address them. Often, an individual’s concern is the concern of many, which we can address with mass media, such as the radio talk shows we conduct during the campaign.

What do you find most rewarding about your job? Statistics are showing that we’ve reduced malaria by half in Nkhotakota District. It’s a real motivator. People are opening their doors so we can spray. Reducing malaria by half is a real achievement. Fewer people are getting sick, which means the project has done a lot in Nkhotakota District. Malaria is the number one killer in the country. When we reach the end of the campaign and all are targets are met, I feel relieved. The project is improving people’s lives.

Tell me about your role as Gender Focal Point?

I work to ensure PMI VectorLink is a conducive environment for everyone to excel in his or her roles. Increasing women’s involvement in IRS not only increases women’s economic empowerment but positions them as role models for other women and young girls in their communities. Personally, as a woman, I feel proud that my salary is improving my family’s well-being. I’m a working mother, contributing to my country.