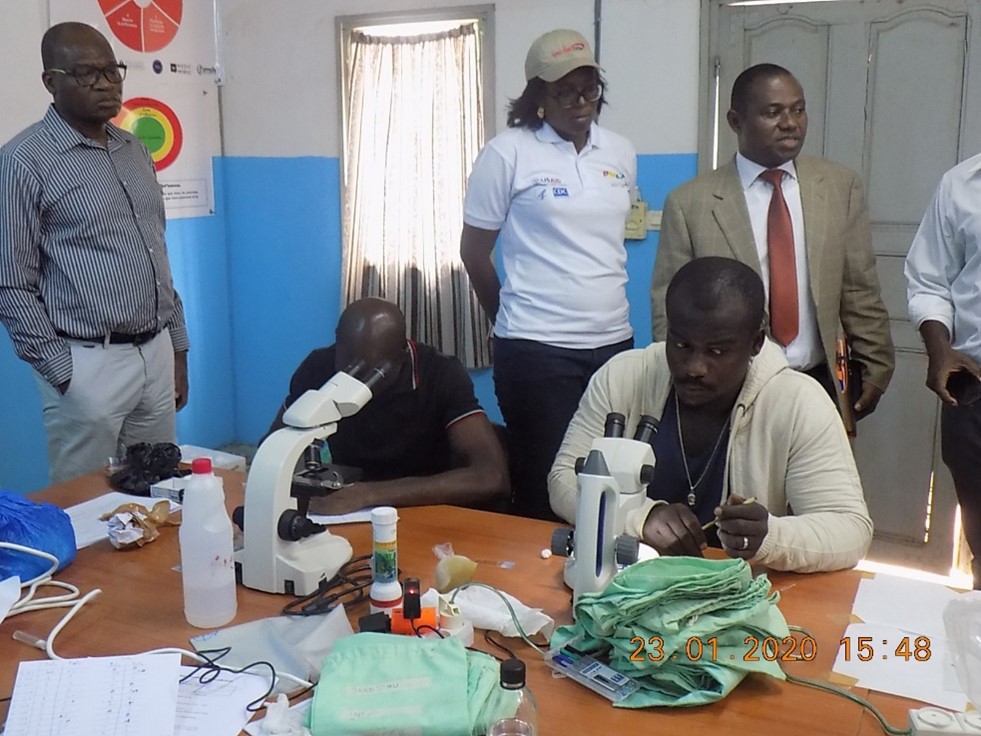 A new study funded by the U.S. President’s Malaria Initiative (PMI) and led by the PMI VectorLink Project found that new vector control tools, such as insecticide-treated nets (ITNs) treated with chlorfenapyr and the synergist piperonyl butoxide (PBO), may help to provide better protection against malaria in Côte d’Ivoire than those currently used. Previously, ITNs treated with pyrethroids alone were the primary net choice in Côte d’Ivoire because they were the only type of ITN available and the pyrethroid insecticide was effective in killing vector mosquitoes on contact. The nets provided additional benefits by serving as a physical barrier between people and malaria-carrying mosquitoes, protecting communities from malaria as they slept. Unfortunately, the widespread use of pyrethroid insecticides has resulted in mosquitoes building up resistance to the insecticide, making the pyrethroid-treated nets less effective.

The mosquito’s resistance to pyrethroid insecticides has had serious implications in the efforts made to control the Anopheles mosquito population in Côte d’Ivoire. As mosquitoes increasingly become resistant to all pyrethroid insecticides across the country and much of Africa, National Malaria Control Programs (NMCPs) are challenged with finding new ways to protect populations from malaria. This study, published in the Malaria Journal in December 2020, demonstrated the relative increase in effectiveness observed when exposing the pyrethroid-resistant mosquitoes to either PBO in combination with pyrethroids or to chlorfenapyr. Both options represent avenues for NMCPs to develop insecticide resistance management strategies. In Côte d’Ivoire specifically, Interceptor® G2 (IG2), a chlorfenapyr- and alpha-cypermethrin-treated net was identified as an option for a stratified distribution campaign in addition to PBO nets.

Despite multiple mass distribution and education campaigns to promote the continuous use of ITNs in country, malaria still accounts for about 33% of consultations in health facilities, with children and women being the most vulnerable populations. WHO 2019 (World Malaria Report) reports Côte d’Ivoire having an incidence of more than 250 cases per thousand people in at-risk populations. In the same period, malaria incidence has doubled in children under the age of five years old (NMCP Annual Report 2019). Given the variable insecticide resistance trends of vectors and the heterogeneity of malaria endemicity across the country, implementing a strategy for the distribution of the new nets required extra consideration. VectorLink Côte d’Ivoire provided technical support to the NMCP to conduct entomological monitoring to help select the most appropriate nets for use in country. Insecticide resistance data collected by the project and the country’s research institute consortium in previous years were used to profile the country and stratify districts for the upcoming 2021 mass net distribution campaign. Once the most appropriate nets were selected based on entomological findings, Global Fund, PMI, and NMCP allocated PBO and Interceptor G2 nets across districts where each type of net’s active ingredients was found to be efficacious against the local mosquito population.

With 113 health districts and varying resistance patterns across the country, PMI VectorLink’s ability to prioritize the districts based on mosquito susceptibility to insecticides used on the Interceptor G2 and PBO nets helped the country make the best use of limited resources. The NMCP Coordinator, Dr. Antoine Mea Tanoh, commended the project’s use of entomological and epidemiological data to guide the strategic deployment of insecticide-based vector control interventions to protect the population. Armed with the most accurate and relevant entomological data, Côte d’Ivoire was able to procure the necessary 19, 313,573 nets to ensure the entire population of nearly 28 million people across 113 districts received the most appropriate ITN intervention for the upcoming campaign.