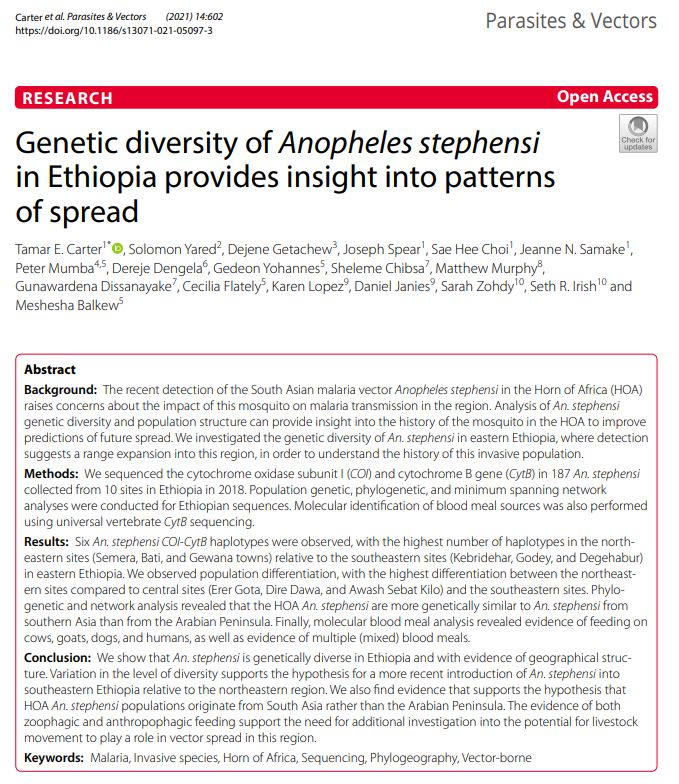 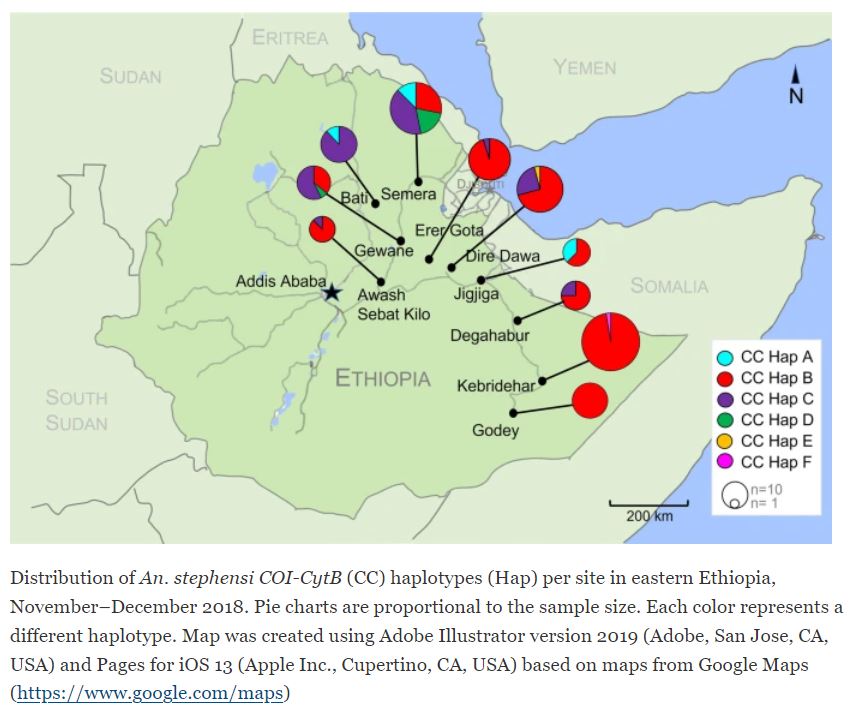 The detection of the Asian malaria vector Anopheles stephensi in the Horn of Africa (HOA) more than 10 years ago has caused growing concern among malaria stakeholders about the invasive vector’s potential to spread malaria and the effect the vector could have on sustaining gains in malaria control in the region. In 2019, the World Health Organization identified An. stephensi as a “major potential threat” in the progress to control malaria and called for enhance surveillance in Africa.

A new study published in Parasites & Vectors, provides insight on the vector’s movement patterns and feeding preferences in Ethiopia. The authors’ findings, which analyzed the genetic variations in An. stephensi populations in Ethiopia, offer vector control decision makers crucial information on how far the vector has spread, where it is migrating, and what the vector prefers to feed on in the region.

In the new study, Genetic diversity of Anopheles stephensi in Ethiopia provides insight into patterns of spread, the authors note, “Since the identification of An. stephensi in Ethiopia, this vector has been detected in 10 additional sites in eastern Ethiopia as far north as Semera and as far south as Godey [13]. Pastoralism is a common livelihood in Ethiopia and involves moving cattle, goats, sheep, and camels hundreds of kilometers every season [19]. Movement may be driven by several factors including limited natural resources, conflicts, recurrent severe droughts, and extreme weather [20, 21].

Resource depletion in recent years has led to movement of livestock over longer distances in search of grazing areas and water [22, 23].”

The authors conclude that “future studies with expanded genomic analysis will further inform our understanding of migration rates and the role of local adaption on the spread of An. stephensi into and throughout the HOA. Collaboration across countries where this mosquito is well established and countries where it is emerging can facilitate a complete understanding of the spread of An. stephensi into Africa.”

As early as 2018, the U.S. President’s Malaria Initiative (PMI) VectorLink Project began collecting mosquito samples of the species in Ethiopia during routine entomological monitoring to study more about the mosquito’s patterns and behavior. PMI provided the mosquito samples for the new study, which was conducted by Baylor University in partnership with Ethiopia’s Jigjiga University and Dire Dawa University.

PMI has also studied the potential impact of the vector’s establishment on the transmission of Plasmodium falciparum in Ethiopia, estimating that annual P. falciparum malaria cases could increase by 50% (95% CI 14-90) if no additional interventions are implemented. Read more here. To learn more about PMI’s findings on An. stephensi’s distribution, bionomics, insecticide susceptibility, and transmission potential, read here.