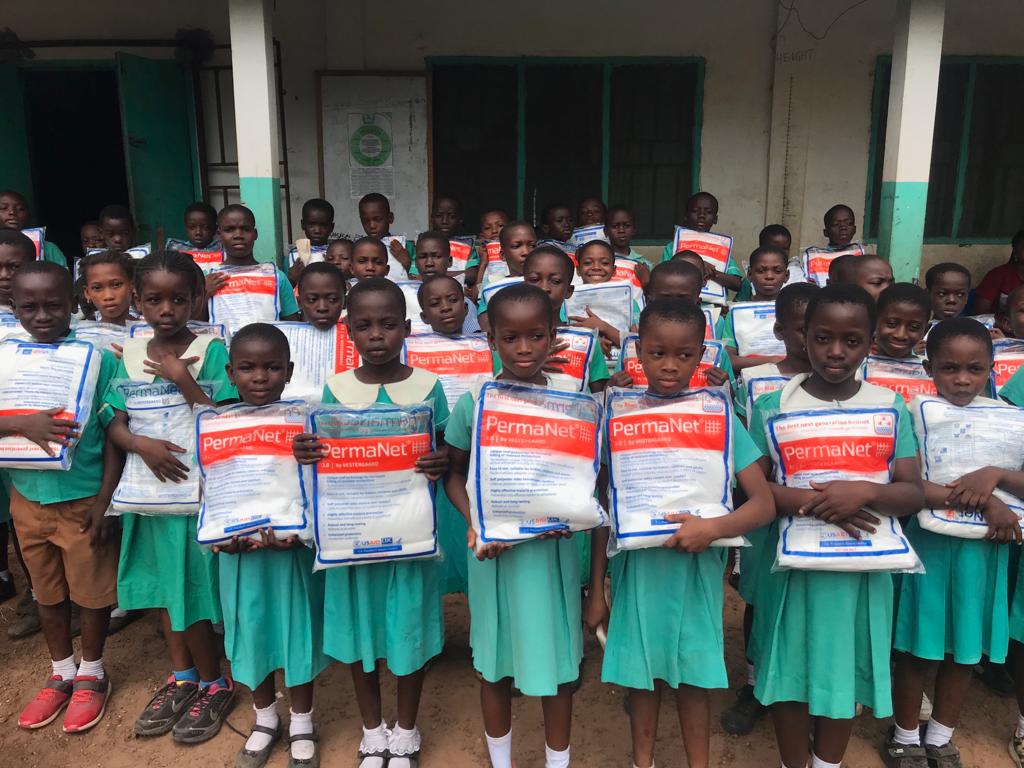 The world has been rocked by high inflation and fuel shortages throughout 2022, and these challenges have impacted the delivery of malaria control services in many countries. Rising costs and limited supplies complicated routine vector control interventions—the distribution of insecticide-treated nets (ITNs) in Ghana and the deployment of indoor residual spraying (IRS) in Sierra Leone. But with the help of strong local partners and some creative planning, the U.S. President’s Malaria Initiative (PMI) VectorLink Project supported both countries in meeting their intended goals despite the obstacles in their way.

In Ghana, teachers in public schools embarked on a nationwide strike in July over the increasing cost-of-living and demanded the government pay them a cost-of-living allowance to help cope with the impacts of high inflation.

Ghana’s school-based ITN distribution coincided with the teachers’ strike. The National Malaria Elimination Program (NMEP) and the School Health Education Program (SHEP), assisted by PMI VectorLink Ghana had originally planned to distribute 1,476,362 nets to students in primary two (second grade) and primary six (sixth grade) who would take these ITNs home for their households to use.

To facilitate the distribution, the NMEP and SHEP, with PMI VectorLink Ghana’s assistance, organized and trained 3,331 regional and district officers from the Ghana Education Service (GES) and Ghana Health Service to assist in the planning and management of the distribution, as well as supervision. A mobile app called Net4Schs was used in the exercise to record and report the distribution data.

At the beginning of the second week of the strike action, when the public school teachers were no longer in the schools, PMI VectorLink, the NMEP, and SHEP amended the plan and used community information centers in rural and semi-urban areas to mobilize parents and students to receive nets since the public schools were not in session due to the strike.  Head teachers and their assistants, who GES directed to remain in school, led the mobilization effort. They were also supported by school improvement support officers (similar to a school district’s superintendent) responsible for record keeping and data entry of nets distributed to students. In the private schools, which constitute 45 percent of primary schools in Ghana, students were able to receive their ITNs as originally planned because schools were in session. Students attending public schools in urban areas had to wait until the strike action was called off due to the difficulty in mobilizing parents who did not respond to requests from school authorities at the same rate as those in more rural areas.

Prices of oil began to skyrocket towards the end of 2021 as the global economy bounced back from the lull caused by the COVID-19 pandemic. With fuel stations not operating at full capacity because of a shortage of reserves in Sierra Leone, adequate fuel supply was hard to find.

PMI VectorLink covers vast distances during its campaigns to spray people’s homes with mosquito-killing insecticide. In Sierra Leone, the project sprays in two districts, Bo and Bombali. For 24 days in May 2022, the team had the immense challenge of finding enough fuel, so they could protect close to 700,000 people in the two districts with IRS before the rainy season began in early June.

To reach these people, many of whom live in remote communities, vehicles are crucial. Spray teams often need to travel long distances to reach the communities where spraying occurs. In 2021, fuel logistics were relatively simple—teams used local fuel stations—but in 2022, most local stations had major fuel shortages. As a result, PMI VectorLink Sierra Leone contracted a major fuel provider, National Petroleum, to ensure enough supply throughout the campaign. The team also had support from the District Health Management Teams, who had intermittent strategic stocks of fuel.

To cope with a limited fuel supply, PMI VectorLink Sierra Leone adjusted their daily spray calendar based on fuel availability, and they fully utilized community mobilizers to maintain regular communication with the target communities, so that residents would be as flexible as possible for potential spray date changes. For most villages, that occurred twice on average. If fuel supply was very low or not available on a specific date, the team would quickly reassess their calendar and conduct IRS in communities close to the base of operations versus spraying remote villages that day.

This strategy allowed the team to minimize disruptions as much as possible. In addition, quick coordination across all operational sites was possible due to the strong partnership with the local District Health Management Teams, who were integrated as part of the overall PMI VectorLink team and assigned to specific operational sites for local government capacity strengthening.

Mosquito vector control efforts often have challenges that need to be overcome, so malaria services can be delivered to those that need them most. While global challenges can impact the delivery of these services, careful planning and flexibility can enable successful interventions despite the challenges.