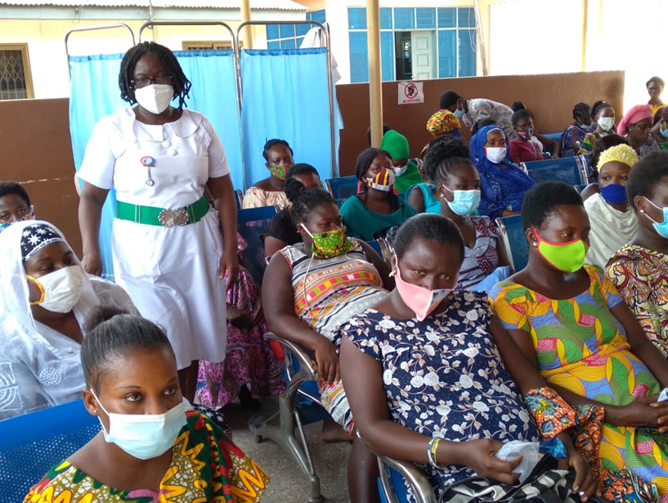 However, analysis of the 2016 Malaria Indicator Survey (MIS) showed that 24 percent of people who have ITNs don’t use them and Ghana has a use: access ratio (an estimate of the proportion of the population using nets, among those that have access to one within their household) of 63 percent. This prompted research to understand the motivators and barriers of ITN use. A 2018 qualitative study[1] identified ITNs as a key method to protecting people from malaria, but heat, discomfort, and reaction to insecticides were identified as main barriers to use.

Using the findings of the 2018 study and analysis of the 2019 MIS data, which also showed 24% of people with ITNs do not use them, the PMI VectorLink Project, NMCP and the Central Regional Health organized a workshop to design behavior change interventions that could increase ITN use in households and communities in December 2019. The project, working with the local nonprofit Total Family Health Organization (TFHO), trained 175 midwives and community health nurses from 114 health facilities in five districts as ITN use and care champions in the Central Region. The aim was to promote positive ITN use and care behaviors among pregnant women, caregivers of children under five, and the entire community. The champions pledged to promote consistent use of ITNs and were provided with a badge and pledge form to display. Additionally, they were equipped with a radio to play recorded messages and other job aids to educate the targeted beneficiaries on ITN use and care. Key messages discuss the benefit of ITNs, their cost effectiveness compared to other tools favored by the population like mosquito coils, proper use of ITNs, and misuse of ITNs.

Edith Asare, a midwife with more than 30 years of experience and a trained ITN champion through PMI VectorLink Ghana, now plays the messages during antenatal care or child welfare sessions, where women have access to ITNs as part of routine channels, to stimulate lively discussions among pregnant women. The pregnant women often leave the antenatal clinic at the Swedru Hospital in the Central region of Ghana with a pledge to sleep under an ITN every night and to become an ITN use and care champion in their communities.

“This intervention is a very positive one. I don’t see this as a [short-term] project but should be part of our approach to continuously educate pregnant women to use ITNs to protect themselves and their unborn baby. This is important as we give out ITNs as part of our routine care to registrants. It should form part of what we do daily. I’ll always promote ITN use,” said Edith.

PMI VectorLink Ghana is working with TFHO and the Eastern and Central region health directorates to scale up implementation to additional 40 districts. They aim to train 2,713 midwives and community health nurses and 4,976 community health management teams (CHMTs)/opinion leaders as ITN champions.The addition of CHMTs is to ensure the community members are involved in planning and implementation of interventions that will promote ITN use and care and to ensure ownership.