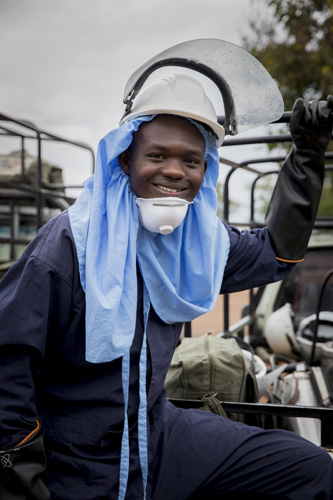 *The PMI VectorLink Kenya project closed out on September 30, 2021.

Approximately three-quarters of the Kenyan population is at risk for malaria. All four species of the malaria parasite that infect humans occur in Kenya. Plasmodium falciparum, which causes the most severe form of the disease, is the most common species and accounts for nearly all malaria infections in the country. The Kenyan government places a high priority on malaria control and tailors its malaria control efforts according to malaria risk to achieve maximum impact. Recent household surveys show improvements in coverage with malaria prevention and treatment measures and reductions in malaria parasitemia and illness.

Indoor residual spraying (IRS) remains one of the key interventions to reduce the malaria burden in Kenya and improve the epidemic response, as stipulated in the Kenya Malaria Strategy 2019–2023. IRS is implemented in two of Kenya’s 47 counties, Homa Bay and Migori, and is funded by United States Agency for International Development (USAID) through the U.S. President’s Malaria Initiative (PMI).

From 2018 to 2021, the PMI VectorLink Project worked with the Division of National Malaria Program (DNMP), formerly known as the National Malaria Control Program, in Kenya to implement three IRS campaigns in Homa Bay and Migori counties (in 2019, 2020, and 2021). IRS was conducted in a total of 1,441,813 eligible structures , protecting a total of 5,887,532 people against malaria, including 136,220 pregnant women and 706,091 children under age five. In all three years, VectorLink Kenya’s spray coverage rate (number of structures sprayed over the number of structures found) was above 90 percent, exceeding the project objective of 85 percent.

PMI VectorLink used Actellic 300CS in the first two years of spraying, and  piloted SumiShield 50WG in one operation site in the first year. In 2021, for the first time, the program team successfully rotated insecticide, in accordance with Kenya’s Insecticide Resistance Management Plan, by spraying Fludora Fusion.

In addition to the above, PMI VectorLink Kenya: