The PMI VectorLink Project’s study “Nationwide insecticide resistance status and biting behaviour of malaria vector species in the Democratic Republic of Congo” was published in the peer-reviewed journal Malaria Journal on March 26, 2018. The study found that widespread resistance to permethrin in the Democratic Republic of the Congo is concerning and alternative insecticides should be evaluated to ensure the efficacy of vector control programs. 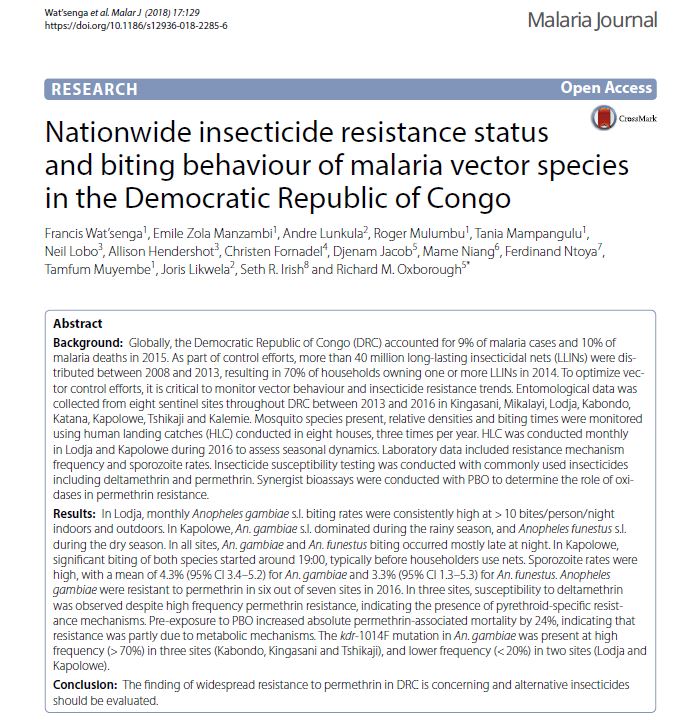 Globally, the Democratic Republic of Congo (DRC) accounted for 9% of malaria cases and 10% of malaria deaths in 2015. As part of control efforts, more than 40 million long-lasting insecticidal nets (LLINs) were distributed between 2008 and 2013, resulting in 70% of households owning one or more LLINs in 2014. To optimize vector control efforts, it is critical to monitor vector behaviour and insecticide resistance trends. Entomological data was collected from eight sentinel sites throughout DRC between 2013 and 2016 in Kingasani, Mikalayi, Lodja, Kabondo, Katana, Kapolowe, Tshikaji and Kalemie. Mosquito species present, relative densities and biting times were monitored using human landing catches (HLC) conducted in eight houses, three times per year. HLC was conducted monthly in Lodja and Kapolowe during 2016 to assess seasonal dynamics. Laboratory data included resistance mechanism frequency and sporozoite rates. Insecticide susceptibility testing was conducted with commonly used insecticides including deltamethrin and permethrin. Synergist bioassays were conducted with PBO to determine the role of oxidases in permethrin resistance.

In Lodja, monthly Anopheles gambiae s.l. biting rates were consistently high at > 10 bites/person/night indoors and outdoors. In Kapolowe, An. gambiae s.l. dominated during the rainy season, and Anopheles funestus s.l. during the dry season. In all sites, An. gambiae and An. funestus biting occurred mostly late at night. In Kapolowe, significant biting of both species started around 19:00, typically before householders use nets. Sporozoite rates were high, with a mean of 4.3% (95% CI 3.4–5.2) for An. gambiae and 3.3% (95% CI 1.3–5.3) for An. funestus. Anopheles gambiae were resistant to permethrin in six out of seven sites in 2016. In three sites, susceptibility to deltamethrin was observed despite high frequency permethrin resistance, indicating the presence of pyrethroid-specific resistance mechanisms. Pre-exposure to PBO increased absolute permethrin-associated mortality by 24%, indicating that resistance was partly due to metabolic mechanisms. The kdr-1014F mutation in An. gambiae was present at high frequency (> 70%) in three sites (Kabondo, Kingasani and Tshikaji), and lower frequency (< 20%) in two sites (Lodja and Kapolowe).