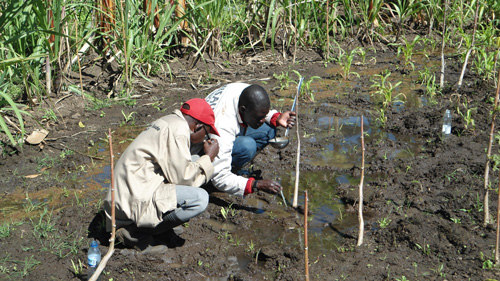 Malaria is considered the most important public health problem in Mozambique where it accounts for nearly one-third of all deaths and 42 percent of deaths in children less than five years old. Although malaria prevalence has decreased in all provinces, the country continues to face challenges that have slowed the progress of key malaria prevention and treatment interventions. PMI-supported activities include support for the national IRS program; free routine ITN distributions to pregnant women and to children; procurement and distribution of rapid diagnostic tests to all levels of the health system; provision of intermittent preventive treatment of pregnant women; and revitalization of the community health worker program.

IRS continues to be a critical component of Mozambique’s National Malaria Control Strategy launched in December 2017 for 2017–through 2022. Through the support of PMI, Mozambique has implemented 13 rounds of IRS since 2007; these include six rounds under the AIRS Project (2011–2017) and two rounds under the PMI VectorLink project (2018–2019).

In 2019, PMI VectorLink Mozambique conducted IRS in five districts in Zambezia province, using both SumiShield® 50WG and Fludora® Fusion, from October 28 to December 14, 2019. The original target was 331,360 structures; in the end, 338,330 structures were sprayed out of 350,172 structures found by spray operators (SOPs), accounting for an IRS coverage rate of 96.6%.

In 2020,  VectorLink Mozambique will work with the NMCP, Zambezia Provincial Directorate of Health (PDH), District Services for Health, Women and Social Welfare (SDSMAS), Ministry of Agriculture and Food Security (MASA), and Ministry of Land, Environment and Rural Development (MITADER) to spray 350,172 targeted structures in five districts using SumiShield® 50WG (clothianidin) and Fludora® Fusion (clothianidin/deltamethrin combination). The project’s primary objective is to reach a minimum coverage of 85% of the structures found in each district by implementing high-quality IRS operations.

In 2020, PMI has revised the scope of the Mozambique project in the following manner:

In addition to spraying, in Year 3, the project will carry out the following activities:

[1] The Global Fund-supported ‘insectary in a box’ in Nampula has not been moved to its final location. VectorLink therefore did not transition the mosquito colony from the provisional insectary to the ‘new’ insectary as planned for 2019.