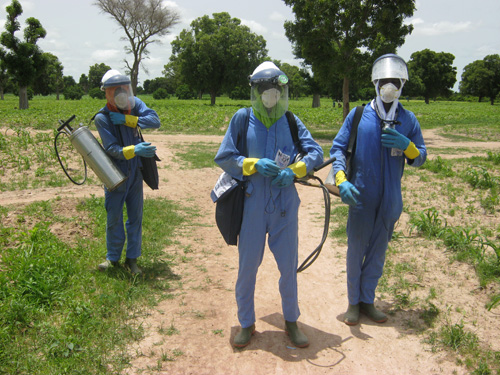 Malaria is the primary cause of morbidity and mortality in Mali, particularly among children under the age of five. While the entire population is at risk for malaria, internally displaced persons migrating from the north are especially vulnerable given their low immunity to infection. Due to the diversity of malaria transmission in Mali, the malaria control strategy emphasizes both universal coverage of key malaria interventions, as well as a specific epidemic and entomological surveillance, and targeted operational research.

PMI VectorLink Mali conducted IRS in four districts in Mopti Region (Bandiagara, Bankass, Djenné, and Mopti) in 2017 and 2018; the most recent malaria prevalence in that region was estimated at 25% compared with 19% nationally. In 2019–2021, PMI VectorLink led IRS in three of the four initial target districts in the region (Bandiagara, Djenné, and Mopti).

The 2021 IRS campaign took place in 19 geographically contiguous health areas (Aires de Santé) across the three districts. VectorLink Mali targeted a total of 65,105 structures in the three districts, and sprayed Fludora Fusion WP-SB in Bandiagara, SumiShield 50WG in Djenné, and Actellic 300CS in Mopti. From June 7 to August 11, 2021, the project sprayed a total of 61,791 structures out of 63,907 structures found by spray operators (SOPs) in the targeted areas, for a coverage rate of 96.7%. In 2021, the VectorLink Mali leadership team again used measures adopted in 2020 to mitigate risk of exposure to both security and COVID-19 challenges before, during, and after spray activities to ensure staff and beneficiary safety.

In year five (January 2022 – December 2022), the PMI VectorLink Mali project will work with the NMCP/MOH to spray 66,214 targeted structures in 19 geographically contiguous health areas out of the 76 total health areas in Bandiagara, Djenné, and Mopti districts, using Actellic 300CS, Fludora Fusion WP-SB, and SumiShield 50WG in the respective districts, in accordance with the national insecticide rotation strategy. The project’s primary objective is to reach a minimum spray coverage of 85% of the eligible structures in each district by implementing high-quality IRS operations, and to protect an estimated population of 260,803. More specifically, the IRS campaign aims to cover:

In addition to spraying, in 2022, the project will carry out the following activities: