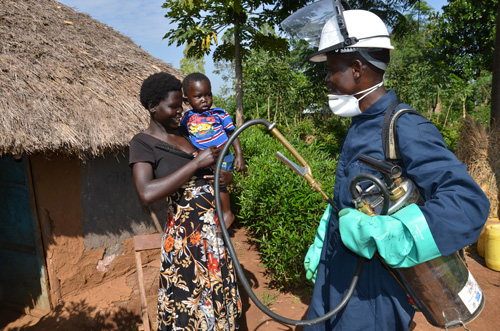 Malaria is the leading cause of morbidity and mortality in Uganda. Accounting for 30 – 50 percent of outpatient visits and 15 – 20 percent of hospital admissions, malaria places a huge burden on the Ugandan health system. Recent PMI-supported activities include: IRS in high burden eastern and east-central districts with persistently high malaria prevalence rates; ITN distribution via ANC/EPI clinics and school outlets as well as social marketing of nets at a subsidized price; training and supervision of health workers in integrated management of malaria including malaria in pregnancy; collection of surveillance data; management and monitoring of insecticide resistance; and behavior change communication activities that reach millions of Ugandans with key malaria messages.

The PMI VectorLink Project aims to contribute to PMI’s goal to halve the burden of malaria in 70 percent of at-risk populations in sub-Saharan Africa. The project will continue to work closely with the Ministry of Health, the National Malaria Control Programme, district health offices, local NGOs, and community leaders to ensure that government, the private sector, and communities are able to sustain and lead future IRS and malaria control programs in their respective countries.

During its first year of implementation, the PMI VectorLink Project successfully conducted a two-phase IRS campaign in 15 districts in Uganda using Actellic 300CS (an organophosphate insecticide). The project sprayed in eight districts during the first phase of the campaign: Alebtong, Amolatar, Budaka, Butaleja, Butebo, Dokolo, Namutumba, and Pallisa, on April 9–May 12, 2018; and seven districts in phase two of the campaign: Bugiri, Kaberamaido, Kibuku, Lira, Serere, Otuke, and Tororo, on June 11–July 14, 2018. The project sprayed in the two sub-counties of Amach and Agali in Lira district on September 3–18, 2018. VectorLink Uganda sprayed a total of 1,292,309 structures out of 1,369,305 structures that the spray operators found in the 15 IRS target districts, protecting 4,436,156 people, including 892,390 (20.1%) children under 5 and 121,590 (2.7 %) pregnant women.

In the second year of implementation, VectorLink Uganda will conduct IRS in the same 15 target districts and provide capacity-building support to the national and district governments to plan and implement quality IRS in the future.

Opening Doors for Women in IRS

It Takes A Village to Fight Malaria