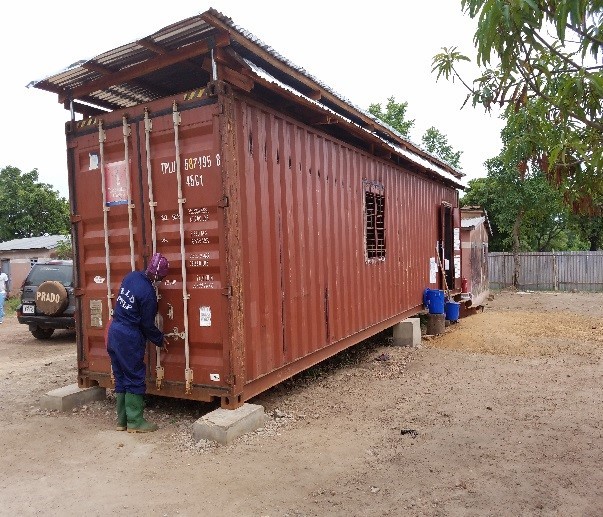 In the West African country of Benin, the U.S. President’s Malaria Initiative (PMI), working in partnership with the Government of Benin, has conducted large-scale indoor residual spraying (IRS) operations since 2008. The PMI VectorLink Project works in 23 countries across the continent to prevent the spread of malaria and implements IRS in 14 countries. IRS kills the mosquitoes that transmit malaria through spraying insecticide on the walls, ceilings and indoor surfaces where the mosquitoes rest.

The Government of Benin contributes to the spray campaign by providing storage facilities in operational sites for the insecticide and supplies used for operations. Safe and easily accessible storage is essential to the success of the IRS campaign.

In 2017, the Government of Benin shifted IRS operations from seven communes in Atacora Department to two other departments of northern Benin: Alibori and Donga. Alibori and Donga were designated as their own departments as recently as 2016. As a result, the departments still lack the necessary buildings needed for their contribution to the IRS operations. To address storage needs, the PMI VectorLink Project transformed six shipping containers into temporary stores (two at the operational site of Djougou1, one at the site of Barienou, one at Kassakou and two at the central store of Natitingou to increase its storage capacities.

The PMI VectorLink Project creatively designed the narrow, 40-foot steel shipping containers to ensure the best use of space. To manage extreme temperatures, the project equipped the store containers with a thermal regulation system consisting of a triplex roof (wooden boards) with openings for the circulation of ambient air and added windows and front doors. The store containers were placed on cement-concrete bases and the waterproofing of the pavements was guaranteed by a plastic sheeting to prevent any flow of liquid product that could contaminate the soil.

Converting a container to a store costs around 2,240,000 CFA ($4,000), which is far more economical compared to the building a permanent structure/store with the same capacity, which can cost more than 10 million CFA or nearly $18,000. Thanks to this innovation, PMI VectorLink has been able to comply with best management practices for IRS in vector control and achieve its spraying coverage targets in the new intervention area during the 2018 IRS campaign.