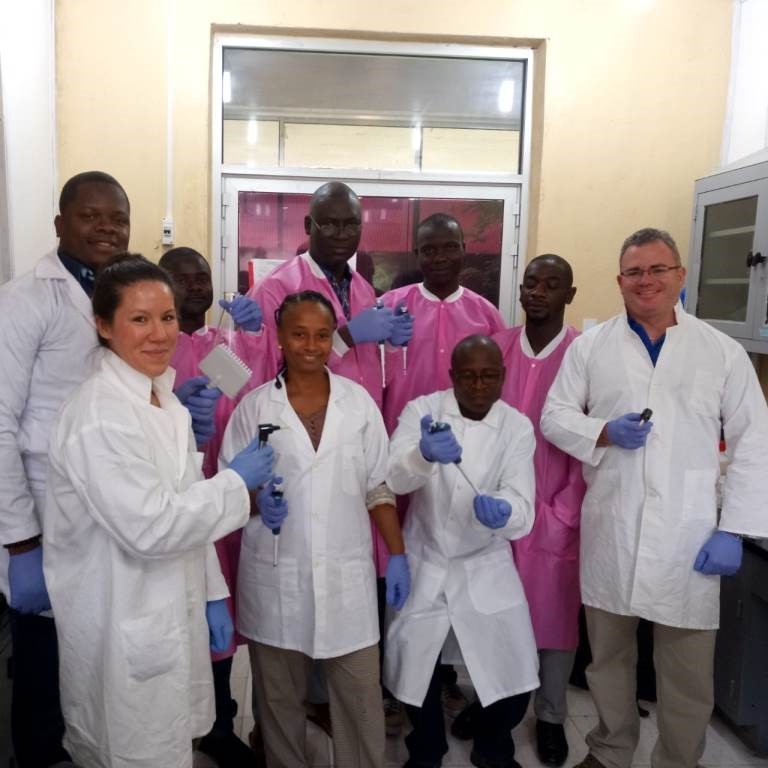 In the West African country of Liberia, the entire population of ~4.85 million is at risk of contracting malaria. As the leading cause of hospitalization and in-patient deaths, malaria exacts a serious health and economic toll on the country. A comprehensive understanding of the mosquitoes that transmit malaria requires trained entomologists who can gather precise data on the composition of the vector species as well as information on mosquito densities, seasonality, geographical distribution, biting time and location, and insecticide resistance status. Such information is critical to inform evidence-based decisions for vector control interventions. The U.S. President’s Malaria Initiative (PMI) VectorLink Project, building on gains achieved under the Africa Indoor Residual Spraying (AIRS) project, works with the Government of Liberia to improve the capacity of local entomologists.

In collaboration with NMCP, PMI VectorLink conducts entomological monitoring in three sentinel sites in three counties: Montserrado, Margibi and Bong. Historically, Liberia has outsourced the laboratory analysis (including species identification and infection rates) of mosquito samples collected during entomological monitoring to other countries. To improve the national entomological monitoring capacity, PMI VectorLink working together with Liberia’s National Malaria Control Program (NMCP) established a partnership in 2018 with the Liberian Institute for Biomedical Research (LIBR), the country’s main vector biology research laboratory. The LIBR has since become a part of the National Public Health Institute of Liberia (NPHIL). The PMI VectorLink Project and NMCP worked closely with LIBR to identify laboratory space at the institute for processing of mosquito samples, renovated the space and equipped it with a freezer, furniture, lab supplies and reagents for conducting analyses.

The PMI VectorLink Project hosted two trainers from the U.S. Centers for Disease Control and Prevention (CDC) Atlanta in April 2018 for a one-week training on laboratory techniques for detecting infectious mosquitoes.  Six technicians (four from LIBR, two from NMCP) were trained on enzyme-linked immunosorbent assays (ELISAs) to assess the malaria sporozoite rate in mosquitoes collected during entomological monitoring.

Following the training, NMCP and LIBR staff began analyzing the 11,000 mosquito samples that were collected and preserved from 2015 and 2016. For the first time, the team was able to identify infection status of Anopheles gambiae s.l., the primary malaria vector in Liberia, using ELISA techniques. Thirty percent of the samples have already been analyzed, and the remaining archived samples are expected to be completed by November 2018.

“As a parasitologist and a researcher, training and working in the project has enabled me to learn and apply the skills and expertise I never had prior to the training,” said Julius Teahton from LIBR. “This has provided me the means to work with mosquito samples using ELISA techniques.”

The PMI VectorLink Project will continue to work closely with the NMCP and other local partners to expand the country’s entomological capacity, supporting further training on ELISA methods to determine mosquito blood meal source and polymerase chain reaction (PCR) techniques for identification mosquito species. Liberia’s increased laboratory capacity to analyze mosquito specimens will provide more data on status and trends of malaria vectors and better inform and guide the country’s efforts to prevent the spread of the disease.