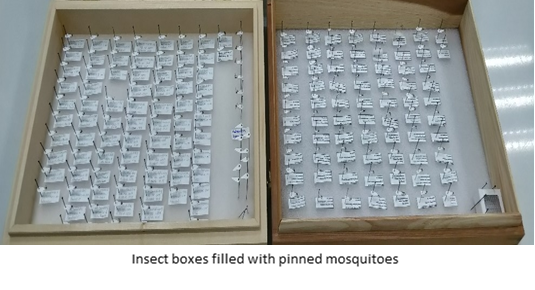 This week’s First Bump goes to VectorLink Cambodia’s Dr. Jeffrey Hii (COP) and Mr. Chanly Yan (Entomology Technician) for supporting the country’s National Center for Parasitology, Entomology and Malaria Control (CNM) in updating malaria mosquito identification keys. Recent studies found that 42.9 percent of Anopheles minimus species A, which is a primary malaria vector in Cambodia, was incorrectly identified by morphology. Misidentifications were also reported among other species groups. Considering that the genus Anopheles contains over 500 species globally, of which only a few are important for malaria transmission, the morphological identification of species is crucial in order to target resources for controlling malaria vectors.

As there is limited information on the distribution, biology and their medical importance in Cambodia, VL Cambodia took on the challenge to update the Anopheles species inventory.

“The first step in malaria mosquito control is to know your enemy,” said Dr. Hii.  “If you don’t know what you’re going after, you’re probably going to be behind from the very beginning.”

Over the last 12 months, Dr. Hii trained Mr. Yan in mosquito mounting techniques and building a reference collection comprising 218 specimens, representing 10 Anopheles species groups. This has resulted in the production of 10 revised pictorial keys (see Photo 4 example) to be used in training new entomologists from CNM. There is no doubt that Mr. Yan’s curatorial work in annotating the mosquito checklist of Cambodia is a labor of love, and obviously very close to his heart. Mosquito curation is a way to preserve field-collected specimens to catalog what species exist in a certain area or to have reference specimens to compare to others in the future. This is the basic fundamental ore of medical entomology.