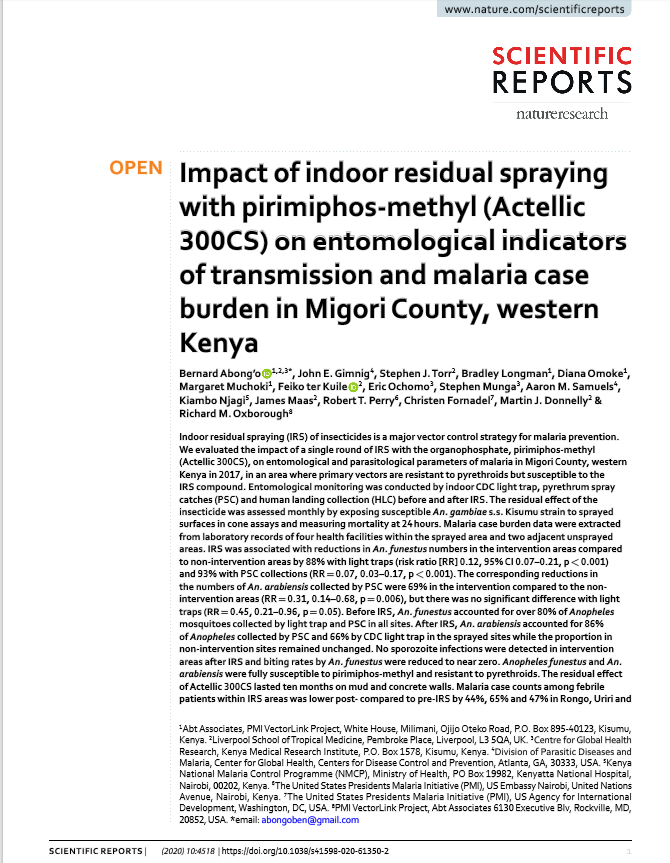 A study conducted by the U.S. President’s Malaria Initiative VectorLink Project (the follow-on project to the PMI Africa Indoor Residual Spraying Project) in western Kenya shows that IRS with pirimiphos-methyl was highly effective for the control of indoor biting and indoor resting, pyrethroid-resistant An. funestus mosquitoes and resulted in substantially reduced numbers of this primary vector species coupled with reduced malaria cases. The study found that due to the long residual effect of pirimiphos-methyl, it was possible to achieve year-round protection with a single round of IRS. Sustaining these gains is a priority for the Kenya National Malaria Control Program and development partners. The authors of the study say that IRS should continue to be implemented to sustain the impact on An. funestus. Because there was less of an impact of spraying on An. arabiensis populations, likely due to their exophilic (outdoor-biting and resting) nature, additional control measures are needed to control outdoor biting and resting An. arabiensis. The peer-reviewed Scientific Reports is the 11th most cited journal in the world, with more than 300,000 citations in 2018*, and receives widespread attention in policy documents and the media.