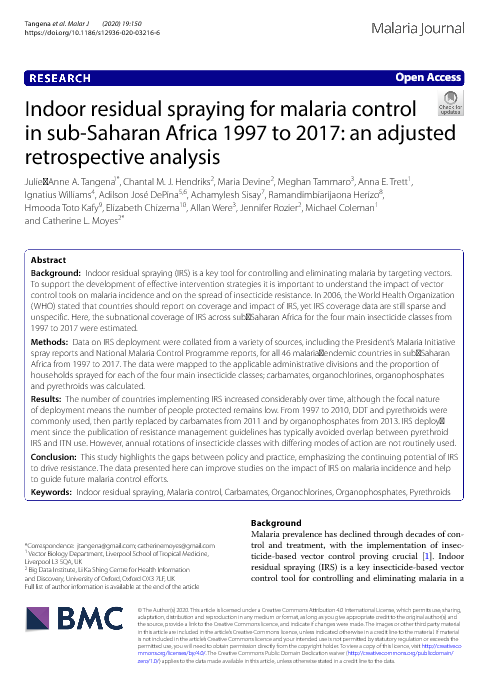 An article recently published in the Malaria Journal shows the importance data can have on improving studies on the impact of indoor residual spraying (IRS) on malaria incidence and its role in helping to guide future malaria control efforts. The research article draws on data from indoor residual spraying campaigns funded by the U.S. President’s Malaria Initiative from 2012 to 2017.

From the article: “IRS is a vital prevention measure for controlling and eliminating malaria by targeting vectors. To support the development of effective intervention strategies it is important to understand the impact of vector control tools on malaria incidence and on the spread of insecticide resistance. In 2006, the World Health Organization (WHO) stated that countries should report on coverage and impact of IRS, yet IRS coverage data are still sparse and unspecific. Here, the subnational coverage of IRS across sub‑Saharan Africa for the four main insecticide classes from 1997 to 2017 were estimated.”

“Data on IRS deployment were collated from a variety of sources, including the President’s Malaria Initiative spray reports and National Malaria Control Programme reports, for all 46 malaria‑endemic countries in sub‑Saharan Africa from 1997 to 2017. The data were mapped to the applicable administrative divisions and the proportion of households sprayed for each of the four main insecticide classes; carbamates, organochlorines, organophosphates and pyrethroids was calculated.

The number of countries implementing IRS increased considerably over time, although the focal nature of deployment means the number of people protected remains low. From 1997 to 2010, DDT and pyrethroids were commonly used, then partly replaced by carbamates from 2011 and by organophosphates from 2013. IRS deployment since the publication of resistance management guidelines has typically avoided overlap between pyrethroid IRS and ITN use. However, annual rotations of insecticide classes with differing modes of action are not routinely used.

This study highlights the gaps between policy and practice, emphasizing the continuing potential of IRS to drive resistance.”