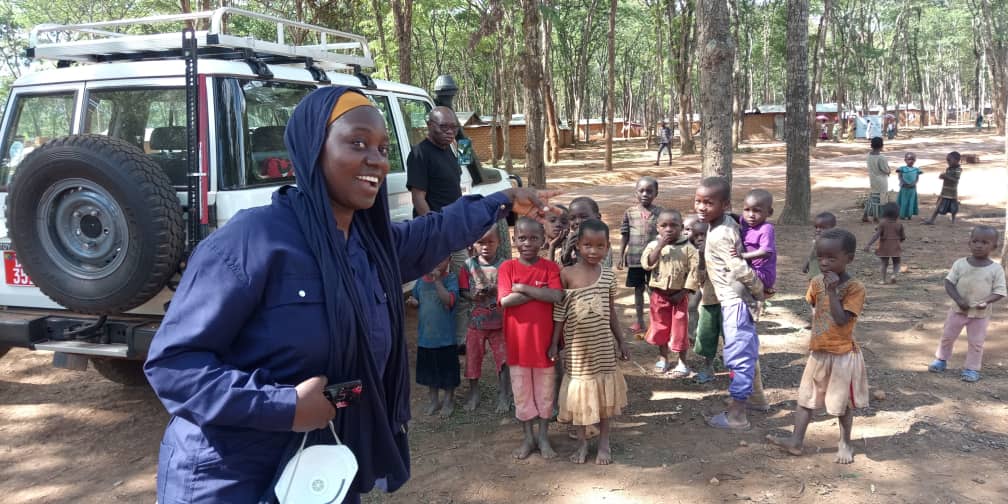 In 2021, over 220,000 people—mostly from Burundi—resided in the Nyarugusu, Nduta, and Mtendeli refugee camps in Tanzania’s Kigoma region. Refugees living in these camps are often confined within them, with limited work opportunities, and must rely on humanitarian assistance to meet their basic needs. They also face multiple health challenges, including malaria, with pregnant women and children under five particularly at risk. With these groups making up a large percentage of the camp population, malaria prevention was critical to protect them from illness.

Indoor residual spraying (IRS) is important to combat malaria. Tanzania’s National Malaria Control Program reached out to the U.S. President’s Malaria Initiative VectorLink Project, requesting a study be made to see if IRS could be conducted safely and effectively within each camp environment. Then, working in partnership with the local district health authorities, PMI VectorLink Tanzania sprayed Nyarugusu camp in Kasulu district, Nduta camp in Kobondo District, and Mtendeli camp in Kakonko district in 2019.

For the subsequent IRS campaign in 2021, in order to strengthen local capacity, PMI VectorLink Tanzania transitioned leadership to the District IRS Technical Teams (DITTs) to lead spraying within the refugee camps, with PMI VectorLink providing support through the provision of supervisory tools and assistance with the recruitment process. PMI VectorLink Tanzania shared all necessary IRS training materials with the DITTs before the start of the supervisor training. The DITTs in Kasulu and Kibondo handled individual sessions of the supervisor training classes while the DITT in Kakonko district managed the trainings with remote oversight from PMI VectorLink. The DITTs in the three districts held supportive supervision spray operator training a week later. While the DITT staff had supervisory roles within the districts, a near total hand off was done at the refugee camps.

Tanzania’s Ministry of Home Affairs and the United Nations High Commissioner for Refugees (UNHCR), which manages the camps, recognized that it was vital to recruit camp residents to play a role in IRS, to support IRS acceptance in the camp community. They hired camp residents—50 percent of whom were women—to work as mobilizers, security guards, water fetchers, and washers. Having these local residents conduct mobilization efforts helped to increase IRS acceptance within the camps, since the mobilizers were known and trusted within the community and were also able to communicate the importance of IRS in their native language.

Mercy Msirikale has worked as a public health officer for the Ministry of Home Affairs for three years. She witnessed the devastating impact of malaria on the camp residents as well as the drop in cases after IRS implementation.

“We appreciate the presence of IRS in the refugee camps because the cases of patients presenting with malaria were frequent sometime back before implementation of IRS, but this has changed over the last three years; malaria cases significantly dropped,” shared Mercy.

IRS has made a substantial impact in malaria prevention as seen by the sizable reductions in malaria cases. In the Mtendeli refugee camp, malaria prevalence fell from 63 percent in 2018 to 15 percent in 2021. During the same time frame, malaria prevalence in Nyarugusu refugee camp decreased from 43 percent to 12 percent. Nduta refugee camp saw a smaller decrease—a trend that is consistent with Kibondo district, where malaria cases were lower to begin with—at 25 percent pre-spray and just below 24 percent after IRS. Due to the number of ineligible structures (often made of plastic) at Nduta camp, the team is planning to coordinate with UNHCR and other partners such as Médecins Sans Frontièrs and Tanzania Red Cross to harmonize other malaria prevention interventions, such as larviciding, insecticide-treated net distribution, social and behavior change, and monitoring and evaluation to harness greater impact.

This capacity strengthening initiative led to Nyarugusu camp attaining a spray coverage of 97 percent, while Nduta and Mtendeli camps achieved coverage of 99 and 96 percent, respectively. In total, the project was able to protect a vulnerable population of 224,393 people (98 percent) within the three refugee camps. Of those protected, 10,346 were pregnant women and 50,368 were children under five.