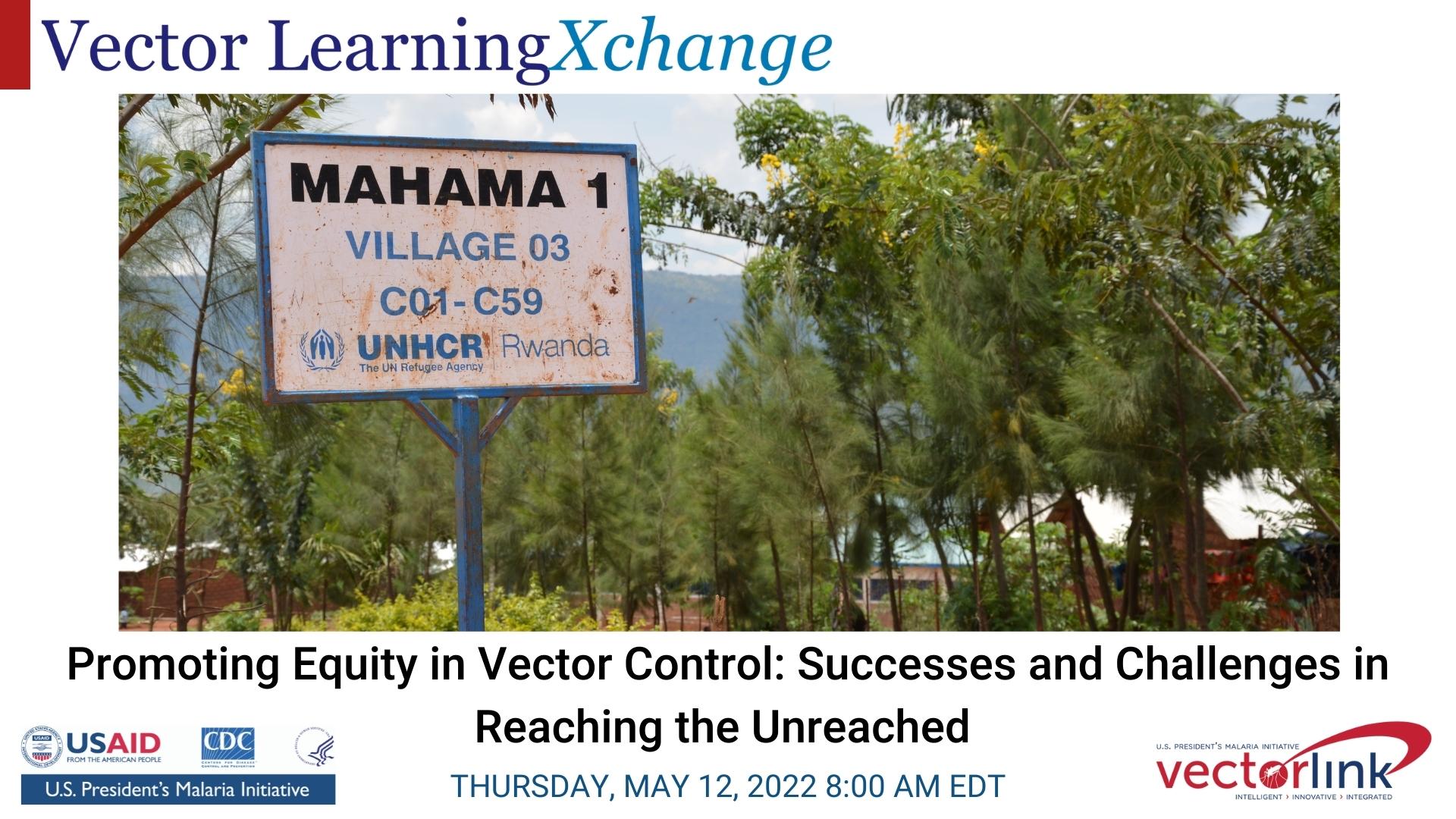 People living with disabilities. People living in prisons and refugee camps. Orphans and vulnerable children. These are specific populations who may not be reached during countries’ malaria prevention campaigns. But with support from the U.S. President’s Malaria Initiative (PMI) and the PMI VectorLink Project, Ghana, Rwanda, and Senegal are making strides to ensure that these high-need and high-risk groups are receiving equitable protection against malaria. Recently, PMI VectorLink hosted a webinar, Promoting Equity in Vector Control: Successes and Challenges in Reaching the Unreached, which highlighted some of their specific efforts.

The deployment of insecticide-treated bed nets (ITNs) and indoor residual spraying (IRS) are two primary vector control interventions that have provided proven protection for millions of people for decades. Ghana aims to reach at least 80 percent of its population with these and other malaria prevention interventions, according to Otubea Akrofi, vector control lead for Ghana’s National Malaria Control Program (NMCP). Among the country’s most vulnerable groups are children living in orphanages, migrant workers, and people living with disabilities. To reach people living with disabilities, the NMCP has worked with the Ghana Society of the Physically Disabled and similar groups, both to engage people living with disabilities in these efforts and to get reliable figures for planning campaigns.

Ghana’s strategy involves reaching people living with disabilities through existing platforms—such as regular meetings of the Federation of Disability Organizations, for example—so that individuals are comfortable in sharing their needs and feedback about IRS and ITN campaigns. Some people living with disabilities take on specific roles in these efforts, serving as community mobilizers, for example, and ensuring a two-way flow of information. Some people living with disabilities may require support from ‘packers’—people tasked with packing up and moving household goods out of homes while insecticide spraying occurs; others may need help in ensuring correct hanging of mosquito nets. Relying on existing community organizations and residents helps to overcome resistance to IRS and increase people’s comfort level with receiving insecticide spray teams into their homes.

In Rwanda, the Ministry of Health identified prisons and refugee camps as needing targeted strategies to implement IRS. The structures and the people living within them have different challenges than many of the standard populations served by malaria control efforts, said Dr. Emmanuel Hakizimana, vector control lead for Rwanda’s Ministry of Health. For example, access to prisons and refugee camps is strictly controlled. Authorization from the ministries involved with prisons and refugees was first needed; then the Ministry of Health identified key stakeholders and involved them in all phases of the IRS campaign, including planning and intervention, supervision, monitoring and evaluation, and adaptation. In addition, to protect the health of the residents after the IRS was completed, the spray teams had to identify convenient sites for soak pits—outdoor areas to safely dispose of the wash water used as part of the spraying process—that were not too close to sites used by residents within these locations.

Senegal’s NCMP emphasizes an inclusive and equitable approach to malaria prevention and treatment in its strategic plan, striving to reach the entire population regardless of socioeconomic level or geographic location, said Dr. Amdy Thiam, vector control lead for Senegal’s NCMP, where he is also the focal point for the distribution of ITNs.

“Equity is really a priority,” said Dr. Thiam. “An inclusive and equitable approach with tailor-made solutions for special groups is necessary to achieve our national goal of malaria elimination by 2030.”

Recently, the NMCP in Senegal has begun piloting a program to reach Talibé students, boys ages 7 to 15 who live in Koranic schools known locally as daaras, which often lack necessities, including mosquito nets. Since the number of daaras and the students they serve are not well documented, the NMCP launched a census with trained community members, reaching out to religious and education leaders at the community level to gain access to the schools and learn more about the students’ living conditions. They noted that in some schools, three to five children were sharing one bed and in others, children were sleeping on the floor, making it difficult to ensure proper ITN coverage. The NMCP worked with the daaras’ leadership to find solutions so that all children were properly protected with ITNs.

As Dr. Thiam noted, since the Talibé program is in the pilot phase, the NMCP will assess and analyze the lessons learned once it is concluded, before proceeding with scale up. Ideally this intervention will be scaled to the national level to reach the entire country and accelerate Senegal’s elimination of malaria.

The effectiveness of piloting new programs as part of an overall strategy to reach those who might otherwise be excluded was endorsed by all the webinar presenters, who recommended pilots as a best practice to further equity in malaria control interventions. The aim of pilot programs, Dr. Hakizimana noted, should be to identify key bottlenecks and jointly solve these issues with the appropriate stakeholders, so that when scaled-up, these programs can be fully integrated into national IRS campaigns, thus avoiding separate logistics for special groups, and maximizing resources in the long run.

“In planning for the vulnerable or the populations that are really hard to reach, you can’t do business as usual,” said Ms. Akrofi. “There has to be purposeful planning, you have to have them in mind, and put in the various strategies that you need to get to them.”

“We really need to move away from the status quo,” echoed PMI VectorLink’s Tess Shiras, the project’s gender equality and social inclusion advisor who moderated the event. “It’s really imperative that national leaders are champions of this work,” she said, citing the inclusion of the Talibé outreach in Senegal’s national malaria strategy.

Watch the recording to see the full discussion about how PMI VectorLink, Senegal, Ghana, and Rwanda are promoting equity in vector control.